Rob Gronkowski always will be remembered for the mark he left on the final Lombardi Trophy he won with the Patriots — a literal mark.

Gronkowski and the Patriots attended the Boston Red Sox’s home opener at Fenway Park in 2019 to celebrate their Super Bowl LIII win over the Los Angeles Rams. In fact, it was a joint party, as the Red Sox also were celebrating their 2018 World Series victory over the Los Angeles Dodgers.

The Patriots were fooling around before the game, with Gronkowski set to throw out the ceremonial first pitch, when the tight end struck.

Julian Edelman lobbed a pitch toward Gronkowski, who was holding the Super Bowl LIII Lombardi Trophy like a baseball bat. At the last second, Gronkowski pulled the hardware around for a bunt, ultimately denting the trophy and forever leaving his mark in New England history.

Gronkowski pulled off some Fenway Park antics two years prior, as well. Tom Brady finally got back his game jersey that had been stolen after Super Bowl LI, and seconds after Brady held it up during a pregame celebration at the Red Sox’s 2017 home opener, Gronkowski swiped it from behind and darted across the diamond with his teammate chasing him.

Many would agree Gronkowski’s antics at any time are enjoyable, but his Fenway fun will go down in the books for both Patriots fans and Red Sox fans. 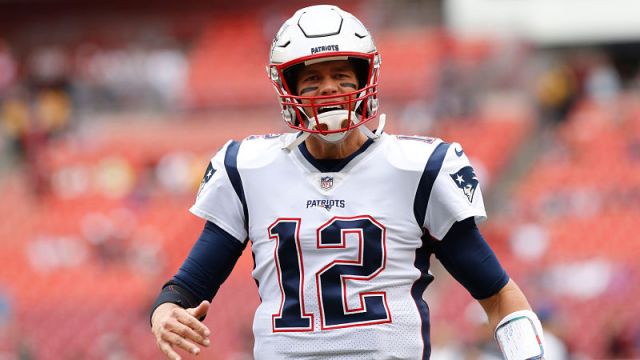