NESN Diary: Are There Solutions To Fanless Games? (And Other Random Thoughts) - NESN.com Skip to content

It appears fanless games will be a reality once most sports resume play following the COVID-19 crisis.

Trust me, this is not the reality I wanted or expected in 2020. None of us did. If we want our sports back, however, it’s a reality we likely will have to face. But that doesn’t mean everyone will be game for it.

“What happens when all the players are a little bit sore or it gets repetitive? The fans bring that energy and add that extra adrenaline that pushes you a little more,? he said Monday, via MassLive?s Chris Cotillo. ?That?s the only downfall I see about not having fans. I like those connections. I like when you make a play, a pitcher strikes someone out or you hit something, I like hearing the cheering. I like to hear the boos. It?s that instant feedback that gives you the adrenaline and makes you a little bit nervous. You feed off of that.”

But won’t those games be, err, lackluster for fans?

Well, have no fear. “The Bachelor” creator Mike Fleiss has come to the rescue with a couple of reality television-esque solutions.

“If there’s no crowd noise, you’ll be able to hear all the trash talking. You might as well embrace it. Start mic-ing up players, or use directional microphones, so you can hear everything that’s being said,” Fleiss told Bill Shaikin of the Los Angeles Times. “That’s something the audience hasn’t had before. Having been on the field at games, hearing it is really exciting. That’s the thing I think would be the best.

“I would be trying to replace the excitement of the fans screaming and the pulsating cheering with the inside scoop of what it’s really like to be in the game and hear everything that?s being said, and even the stuff on the mound.”

He also thinks players’ loved ones ought to get involved, too.

“You can (film) all the girls. … They?re in the stands, separated in their own sections or whatever. Those guys are now playing for more than the pride of winning a baseball game. If you go on an eight-game losing streak, that?s not good.”

Having players mic’d up for games certainly isn’t a new concept. Major League Baseball players have been donning microphones for years now, giving fans an inside look at what goes down on the field, at least from that particular player’s perspective.

Mic-ing up every player, however, could bring a whole new dimension to the game whether fans are in the stands or not.

Let’s hear the trash-talking. Let’s hear the strategy. There’s so much more going on during any given game than fans can even imagine, largely due to the countless conversations between players, both friend and foe. Adding microphones to the mix would give fans an increased context, and could even make a high-stakes game even more thrilling, in theory.

But having players wear microphones certainly isn’t the only solution to fanless games. No, we’re not talking about planting plastic dummies or cardboard cutouts in stands to simulate the feeling of fans in the stands. In fact, there are quite a few solutions major league sports could adopt that might help fans feel more invested while they’re unable to attend games in person.

And with sports gambling becoming increasingly legal across the United States, incorporating that into games more than before wouldn’t be such a bad idea either. Sure, teams don’t directly benefit from the money gambled, but the ability to bet on sports has a proven ability to boost viewership and engagement amongst sports fans — and isn’t that what’s we’re searching for right now?

Look, there’s no real solution for fans looking to regain the exact environment they’re accustomed to during a typical regular season. But this isn’t any ordinary season for any sport. Unfortunately, the coronavirus has changed the way we go about our daily lives — even when it comes to sports. And like it or not, this is the reality we live in and might be stuck with for at least the next 12 months (if not more).

We’ll get back to normal someday. But for now, let’s embrace some of the creative solutions being offered. Who knows? Perhaps there’s a new normal right around the corner, and we might not even know it.

Anyway, here are some of Monday’s more interesting storylines:

— The sports world is bidding farewell to a true NFL legend.

Don Shula died Monday morning at age 90. The longtime Miami Dolphins coach, the winningest coach in NFL history, retired from the league in 1995 and was inducted into the Pro Football Hall of Fame in 1997.

“Don Shula was the patriarch of the Miami Dolphins for 50 years,” the Dolphins said in a statement. “He brought the winning edge to our franchise and put the Dolphins and the city of Miami in the national sports scene. Our deepest thoughts and prayers go out to Mary Anne along with his children Dave, Donna, Sharon, Anne and Mike.”

— Speaking of football, NFL fans won’t have to wait much longer for the release of the 2020 schedule.

This season’s schedule is expected to drop Thursday (May 9) at 8 p.m. ET. The announcement will be made live on NFL Network and will be broken down division-by-division. (No international games will be featured on this season’s slate, however.)

So, mark your calendars!

— Meanwhile, the NBA is plotting its return. And it could feature a couple of interesting bubble cities.

Both Las Vegas and Walt Disney World in Orlando, Fla. are being considered as potential locations for the NBA’s return to play. Thirty to 40 ?essential people per team and players? close family members? reportedly will be permitted to visit the site.

“I?m told preliminary plans have consisted around a two-week quarantine period in which everyone there is tested; once those two weeks end, retest and allow the players who remain as negative tests to start a 14-day training camp,” The Athletic’s Shams Charania said Monday. “It will require the necessary amount of tests ? rapid ones, at that ? and agreements with the league and its players association. A White House official told me that the government will help the NBA and any league that is looking to return to play.”

— Hey parents: do you actually like homeschooling your kids? Well, neither does Johnny Damon.

The ex-Red Sox outfielder joined Tom Caron on Monday’s edition of “At Home With TC” to discuss life during quarantine, and Damon certainly didn’t hold back.

“It’s horrible,” Damon said bluntly. “I mean, it’s 10 hours of schoolwork a day. And it’s like, yeah I’m a lot smarter than my … idiot namesake, but I don’t want to be doing this! I’d rather be on the golf course. I’d rather be taking the jet skis out. But doing school work? It’s definitely not the hardest thing, but we all have to sacrifice and my kids are pretty darn good.

“It’s my little man Dash — he’s the one who gives me all the headache because he takes after his name. He’s fast as heck, and you turn and he’s running and jumping in the pool. He’s the guy who’s keeping me in shape right now. So, I guess that’s a good thing.”

OK, but it hasn’t been all bad.

“There are some crazy times. But I love it. I love my family, I love my kids. So, it’s been great.”

Johnny Damon on homeschooling: "It's horrible!" ?

He joins TC ahead of Game 7 of the ALCS tonight @TomCaron | @JohnnyDamon | Weeknights at 8pm ET pic.twitter.com/U3b4dTnVQY

(Side note: We really missed the caveman look.)

Stat of the Day
Sorry, Yankees fans. This one’s not for you.

The 2010s were the first decade since the 1910s in which the Yankees did not make the World Series.

The Yankees' 4 straight LCS series losses is tied for the longest such streak in LCS history. https://t.co/hxwmzA8lfZ

We can't wait to fill those seats again ?#StaySafe pic.twitter.com/wcYVIdV8eT

Video of the Day
May the fourth be with you…

Our guys trying to name #StarWars characters is still everything ? pic.twitter.com/2V85aOhcS5 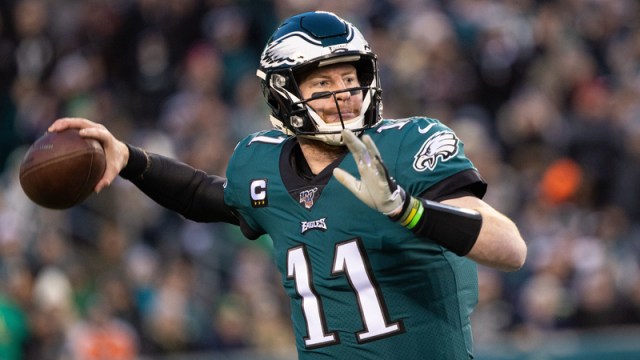