Now the B’s can shift their focus to the playoffs after Bettman revealed what the 24-team plan, as well as the four-phase idea to return will look like if when play resumes.

Boston ended its regular season with 100 points and will be one of four teams to play in a round robin tournament to decide the seeding in the Eastern Conference. This means the Bruins could be the No. 1 seed in the East, but also means they could be the fourth.

The B’s will join the Tampa Bay Lightning, Washington Capitals and Philadelphia Flyers as the four teams to represent the Eastern Conference. So yes, the Flyers potentially could finish higher than Boston.

Under this format, Boston would play the Columbus Blue Jackets or Toronto Maple Leafs — two teams the Black and Gold eliminated last year en route to the Stanley Cup Final. The B’s struggled against the Blue Jackets this season, though, going 0-1-1, while having a 2-0-1 record against the Maple Leafs.

Toronto has had issues getting by Boston in years past. Who could forget its epic collapse in 2013 during Game 7 when the Leafs looked poised to move on in the fight for Lord Stanley. But the improbable third-period comeback capped off with Patrice Bergeron’s overtime goal sent Toronto packing.

It suffered the same fate last season in seven games at the hands of Boston.

The Blue Jackets’ series last year against the Bruins was physical and had a lot of memorable moments — including a Game 7 promise from Columbus head coach John Tortorella (that never came to fruition) and Brandon Carlo playing a key role in the game-winning goal for Boston’s Game win.

Of course, neither team would be a cake walk for the B’s. No team has touched the ice since March and now may not get back on it until June. No team really is at an advantage (or disadvantage). The Leafs have a lot of talent on offense, but never really addressed the issues on defense — something that is a strength of the Blue Jackets. Boston’s offense, as you know, is incredibly strong — especially the top line of Patrice Bergeron, David Pastrnak and Brad Marchand. The team was red-hot before the season was put on pause.

Blue Jackets goalie Elvis Merzlikins was having an incredibly productive season — and one of the best as a rookie in recent history — before the pause. But the tandem of Tuukka Rask and Jaroslav Halak was one of the league’s best. And Halak was able to provide Rask with some much-needed rest when necessary throughout last year’s Cup run and this season.

The Bruins will get a first-round bye if and when the playoffs begin, which is a plus, and will be guaranteed a spot in the playoffs after their best-of-three round robin series. The long layoff could benefit veterans like Zdeno Chara and Patrice Bergeron. The added rest may mean they’re a bit fresher. But not being on the ice for this long certainly raises some questions about everyone’s readiness.

It also means Torey Krug and Brandon Carlo will be 100 percent ready if hockey does resume this summer. Kevan Miller, who suffered another setback recently, will be the only member of the Bruins who won’t be available for the playoffs.

If all the phases go as planned, we’ll have hockey on our TVs in just a few months and the Bruins will look to get back to the Stanley Cup Final (albeit in a non-conventional way) for the second straight year.

More: Here Are 10 Locations NHL Is Considering For ‘Hub Cities’ To Resume Play 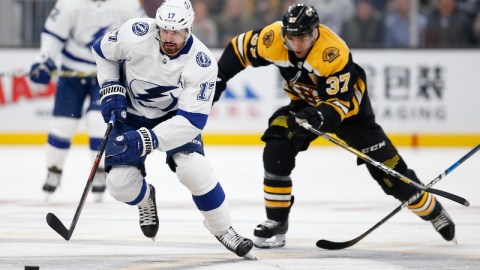