Breaking: Sources have confirmed there are multiple positive tests for COVID-19 on the PGA Tour, in addition to the one reported earlier this morning.

ORIGINAL STORY: One of the biggest stars in golf reportedly won’t play this weekend after a positive coronavirus test — from his caddie.

Brooks Koepka will withdraw from the Travelers Championship after his caddie, Ricky Elliott, tested positive for COVID-19, Koepka told Golfweek.

“I’m going to pull out to protect everybody else,” Koepka told Golfweek. “I think it’s the right thing to do. I don’t want to risk anyone’s life if they have respiratory issues or underlying conditions. The only way this Tour can continue is if guys to do this sort of thing and be proactive about it.”

The Travelers will be the PGA Tour’s third tournament since returning from a nearly three-month hiatus due to coronavirus. The PGA Tour reported zero positive tests in its first week back, but Nick Watney became the first player to test positive and withdrew from the RBC Heritage last week in Hilton Head, S.C.

Cameron Champ became the second player to test positive Tuesday and withdrew, while Graeme McDowell also withdrew from the Travelers after his caddie tested positive.

It also sounds as if there’s another positive test on the way. Golf Digest’s Brian Wacker reported Wednesday morning another unnamed player tested positive ahead of this week’s tournament in Connecticut.

The PGA Tour obviously had a strict program in place for positive tests, which were to be expected. What’s unclear, though, is how many positive cases the Tour is willing to accept before realizing or admitting there’s an outbreak happening. Purely speculating, it doesn’t seem like they’re there yet, but these things can change in a heartbeat, and it underscores the difficulty of trying to resume a professional sports league in a pandemic.

More: MLB Will Take These Measures To Prevent COVID-19 Spread During Season 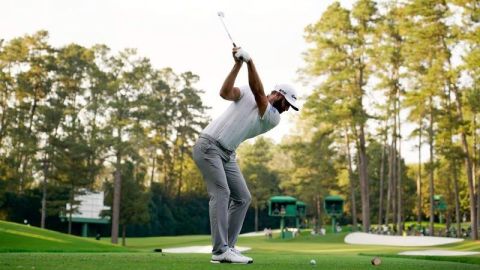