Well, it turns out there will be a 2020 Major League Baseball season after all.

After months of deliberation, MLB and the Major League Baseball Players Association on Tuesday agreed to terms on the structure of the upcoming campaign. It will be a quick turnaround for players, as they’re set to report to training camp July 1, and the 60-game regular season will begin either July 23 or July 24.

Within the official statement released Tuesday, the league noted “the proposed schedule largely will feature divisional play, with the remaining portion of each club’s games against their opposite league’s corresponding geographical division.” So for the Red Sox, their schedule will include matchups with the five National League East teams in addition to contests with the New York Yankees, Baltimore Orioles, Tampa Bay Rays and Toronto Blue Jays.

According to The Athletic’s Jen McCaffrey, Boston will play 10 games against each American League East rival. If that’s the case, one would assume the Red Sox, in turn, would play four games against each the Philadelphia Phillies, New York Mets, Atlanta Braves, Miami Marlins and reigning World Series champion Washington Nationals.

Either way, Red Sox Nation surely must be thrilled their favorite team soon will be back in action, regardless of which club will be in the opposing dugout. 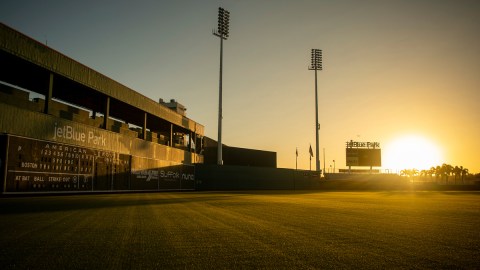