Tyson Fury and Anthony Joshua are on a collision course that’ll culminate with two fights next year.

Fury confirmed Wednesday on Twitter that he will face Joshua after completing his trilogy fight with Deontay Wilder.

The Gypsy King’s tweet — in which he vowed to “smash” Wilder and “annihilate” Joshua — came on the heels of promoter Eddie Hearn revealing Wednesday in an interview with Sky Sports that Fury and Joshua have agreed to a deal for two fights in 2021.

It’s official FURY VS JOSUAR AGREED FOR NEXT YEAR, I got to smash @bronzebomber first then I’ll annihilate @anthonyfjoshua #WEARESPARTANS

MASSIVE THANKS TO DANIEL KINNERHAN FOR MAKING THIS HAPPEN.???? god bless pic.twitter.com/18FfVKfCax

Fury (30-0-1), the reigning WBC and lineal heavyweight champion, defeated Wilder (42-1-1) via seventh-round TKO back in February. The two fought to a draw in their first matchup in December 2018. A trilogy fight had been scheduled for July 18, but the coronavirus pandemic threw a wrench into those plans. It’s possible they’ll square off later this year.

Joshua (23-1), the WBO, WBA and IBF heavyweight champion, is coming off a victory over Andy Ruiz Jr. back in December. Ruiz shockingly defeated Joshua in their first fight last June, but AJ avenged his lone professional defeat and recaptured his titles in the rematch by earning a unanimous decision. Joshua was scheduled to face Kubrat Pulev on June 20 before the COVID-19 outbreak forced the fight’s postponement.

As ESPN notes, if both Fury and Joshua retain their titles ahead of facing each other, it’ll set the stage for a unified heavyweight champion for the first time in over 20 years. 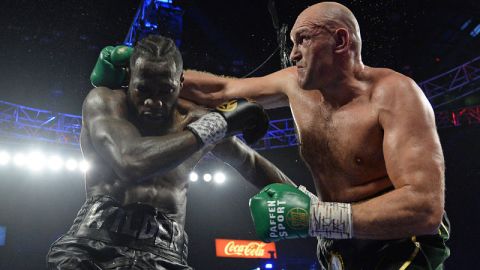