Three games in to the Connecticut Sun’s season, and it’s clear that DeWanna Bonner has integrated quite well to her new team.

The Sun fell 81-76 to the Los Angeles Sparks, but Bonner lit it up dropping a game-high 34 points, 14 rebounds and five assists for the Sun on Thursday at IMG Academy in Bradenton, Fla.

Her performance set a new WNBA record for points through the first three games of a season from a player on a new team (78).

Unfortunately, though, her efforts weren’t enough to make up for Connecticut’s freezing cold shooting performance in the fourth, or for how long it took Ashley Thomas to get going. She had one first-half point, finishing the game with 10 total, but was unable to get her shots to fall consistently until the third as the Sun battled through lead changes with the Sparks. She did, however, record an impressive 18 boards with eight assists.

With that, the Sun fall to 0-3 on their season while the Sparks improve to 2-1.

The Sun got out to a hot start, opening the game on a 6-0 run led by Bonner, who had nine first-quarter points shooting 3-for-4 from the field, including one 3-pointer.

In her third game with the Sun, Bonner passed WNBA legend Sheryl Swoopes to become the 23rd All-Time scorer in the league.

And it didn’t take long for Jasmine Thomas to join her on the scoring, adding five points in the first.

But the lead was short lived thanks to play after play from Gray and Ogwumike, who each put up six first-quarter points. Seimone Augustus tied it up for Los Angeles at 16 apiece inside of two minutes and a Parker free throw gave them a lead they’d keep through the rest of the frame.

The Sparks finished the opening quarter with a 19-18 lead.

Kaleena Mosqueda-Lewis came off the bench in the second and hit a 25-foot jumper to give Connecticut it’s lead back, and Bonner extended it with a catch-and-shoot jumper with five minutes left in the half.

But it was back and forth from there, with Ashley Thomas locked down through most of the first half. By halftime, she’d only put up one point (0-for-8 from the field) but managed 10 boards and four assists.

The quarter saw five lead changes, but ultimately ended with the Sparks up 41-36. Bonner led scoring with 17 first-half points while Gray had a team-high 10 points in Los Angeles’ balanced offense.

WELCOME TO THE BONNER SHOW

Bonner assisted Alyssa Thomas to take an early lead in the third, Gray stole the lead back with a 24-point trey, and then Alyssa Thomas returned the favor on the other end setting up Bonner on an ally oop layup to tie it up at 24 points each.

Every hour is scary hour. https://t.co/hFGivpRpCe

The Sun needed Alyssa Thomas to get more involved in the offense if they were going to pull away, and she did. But it was Bonner who ensured the Sun kept the lead through most of the third.

Augustus hit a jumper to tie things up with 3:02 on the clock, and the Sparks went on a mini run led by Brittney Sykes as missed layups and free throws plagued the Sun’s attempt to create separation.

By the end of the third, Bonner had scored 26 points, but was the only Sun player to reach double figures. The Sparks led 63-57 heading into the fourth quarter, tied for the largest lead of the game.

To start the final frame, Los Angeles went on a small run that gave them a 10-point lead after a Parker basket. And from there, the Sparks had all the energy and momentum in their favor.

The Sun picked it up towards the end of the stanza, outscoring the Sparks 19-18, but the effort was too little, too late.

Chelsea Gray is a hooper, no question about it. This footwork, though?

The Sun take the court again Saturday against Minnesota, where they’ll hope to avenge their opening game loss to the Lynx. Tip-off is at 4 p.m. ET. 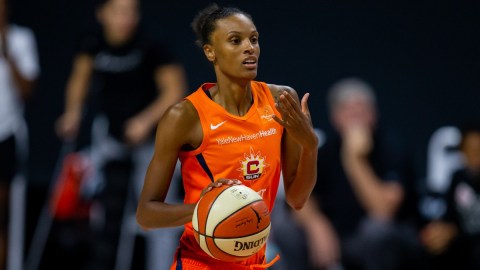 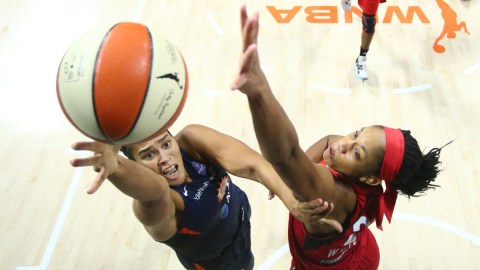