Jack Studnicka might not have to wait long to make a postseason impact on the Boston Bruins.

The Bruins forward recently has been thrust into action as a second-line winger during the team’s Phase 3 camp ahead of the Stanley Cup playoffs during the NHL’s restart. Studnicka has been skating alongside David Krejci and Jake DeBrusk on that line in practices and should get a chance to show his worth Thursday night in the Bruins’ lone exhibition game ahead of round-robin play.

Bruce Cassidy on Tuesday seemed to indicate Studnicka was the leading candidate to replace veteran winger Ondrej Kase, who has yet to join the team in Toronto after being deemed unfit to participate. At the very least, the Bruins coach said Studnicka is likely to skate on the second line when Boston plays the Columbus Blue Jackets on Thursday night.

If Studnicka is able to secure that spot, at least to begin the playoffs, it would be quite a statement on how the club feels about the 2017 second-round draft pick. As far as how Studnicka feels, it sounds as if he believes he belongs.

More Bruins: David Pastrnak Explains Why He Missed So Much Time During Training Camp

“Definitely feel most comfortable I have throughout training camps and black aces,” Studnicka said Tuesday during the Bruins’ media availability. “Every single time we’re able to join the team in a situation like this, I think I get more comfortable. … Definitely every day gets easier, but in terms of (comfort), I’m 100 percent comfortable now in comparison to times in the past where I would have been nervous or starstruck to share the ice with these guys.”

That has shown in his play, too.

“I talked to David about his right-side options. I’ve been doing a lot of that over the last few years. He likes the way Jack plays,” Cassidy said Tuesday. “He makes plays in traffic. Jack seems much more confident with the puck than maybe in training camp in September and October, so if he can do that and balance his shot vs. pass mentality — he likes to hang on to it an extra second and look to make a play — and sometimes at the (NHL) level, especially in the playoffs, you’ve gotta have more of a shot mentality. That’s something he’ll have to sort through.”

Studnicka isn’t the only player in the mix. Cassidy said he’d also consider Anders Bjork and Karson Kuhlman for the job, but it sounds like it’s Studnicka’s to lose, at least early on. In fact, if Studnicka proves himself, he could find himself staying in the lineup if and when Kase is cleared to return.

“Ondrej came late. He came at the deadline. He was building — that’s not a negative — it’s just I don’t know,” Cassidy said. “I don’t know the player well enough right now. He only had a handful of games to integrate himself in the group. … That would be an interesting one. Let’s just say it’s Jack,  it’s Bjork, whatever, that takes off and Ondrej’s not ready and they’ve strung together five, six, seven games, played a round, whatever. You’d have to seriously consider making a change to a guy I’ve seen more of, but those are things you decide down the road.

” … It wouldn’t be automatic that I put Ondrej in if the young kid was playing really well.” 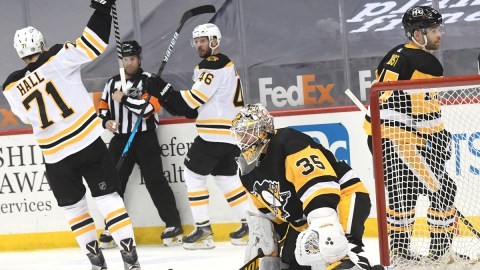