It’s official: The Boston Red Sox are off to a slow start, and the pitching is a problem.

(Normally, we’d wait longer than three games to deem anything a “problem,” but in a 60-game season, there isn’t a whole lot of time for patience.)

The Red Sox fell 7-4 on Sunday to the Baltimore Orioles, perhaps the worst team in all of baseball. Boston lost the second two games of the three-game set after winning the season opener in dominant fashion.

Ryan Weber got the start for the Red Sox and was not good, allowing six earned runs a day after Martin Perez gave up five runs to arguably the worst lineup in the majors. The Orioles out-hit Boston, 10-7, though the Red Sox bats did their best to come back in the late innings.

The Red Sox fell to 1-2 with the loss, while the Orioles improved to 2-1 with the victory.

There’s no way to dress up back-to-back blowout losses to a bad team in the midst of a total rebound. The starting pitching wasn’t good, and the offense offered too little, too late.

ON THE BUMP
— In fairness to Weber, he only is the No. 3 starter out of necessity. Still, the veteran right-hander needs to be better not only to hold his spot in the rotation, but also to give the Red Sox a chance to win on days when Nathan Eovaldi or Eduardo Rodriguez aren’t pitching.

The Orioles got started early against Weber as Rio Ruiz took the Red Sox starter deep for a two-run homer. After giving up another run in the third (Jose Iglesias RBI double), the wheels totally came off in the fourth, with the Orioles scoring three runs on a single, walk, sacrifice fly and a two-run homer, a blast by Anthony Santander that chased Weber from the game.

Rio has a thing for homers this weekend. pic.twitter.com/Dpy1IH63up

— Colten Brewer took over with two outs, gave up a single and issued walk before striking out Hanser Alberto to end the inning. The right-hander then pitched a 1-2-3 fifth.

— Marcus Walden pitched around a hit and two walks to deliver scoreless sixth and seventh innings. He hardly dominated, but he quited Baltimore’s bats as the Red Sox attempted a comeback.

The right-hander, who was great in the first half of last season before falling off in the second half, has the ability to play a key role on the club given his ability to pitch multiple high-leverage innings.

— Matt Barnes started the eighth inning by walking the first two batters, but retired the next three to deliver a scoreless frame. It was the first appearance of the season for the right-hander, who took an Iglesias line drive off the foot to end the inning. Barnes’ leg likely prevented Iglesias from going 5-for-5 on the afternoon.

— Austin Brice struggled in the ninth, allowing Chris Davis to drive in Baltimore’s seventh run of the game with one out in the inning. Davis wound up getting doubled up to end the frame.

IN THE BATTER’S BOX
— It was an up-and-down day for the offense, which struggled to find that big hit in the final two games of the series.

— Christian Vazquez took Orioles starter Wade LeBlanc deep for a solo homer in the second. It was the first home run of the season for the Red Sox catcher, who hit 23 last season.

& that one probably landed on the Mass Pike ? pic.twitter.com/EjmvQzduBm

He also hit a single in the ninth, but wound up stranded on base.

— Xander Bogaerts got Boston back in the game with a two-run single in the sixth. However, the Red Sox shortstop would’ve had an even bigger day if it weren’t for Santander robbing him of a solo home run in the fourth.

— Kevin Pillar took LeBlanc deep in the fifth inning for a solo blast, his first homer in a Red Sox uniform. The outfielder’s home run cleared everything in left field.

Kevin Pillar is in the building!
pic.twitter.com/cwjNfQig1l

— The only other members of the Red Sox with hits were Bradley (2-for-3) and Devers, who doubled to pick up his first hit of the season.

UP NEXT
The Red Sox on Monday will open what essentially is a four-game series with the Mets (two games in Boston, two in New York) at Fenway Park. Michael Wacha is set to toe the rubber for the Mets, whereas the Red Sox have yet to announce their starter. 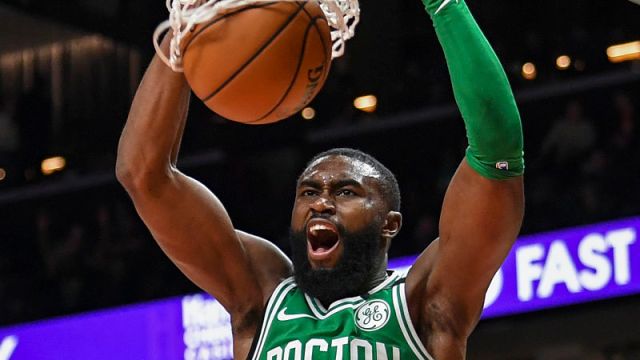 Check Out Highlights From Celtics’ Scrimmage Victory Vs. Suns On Sunday 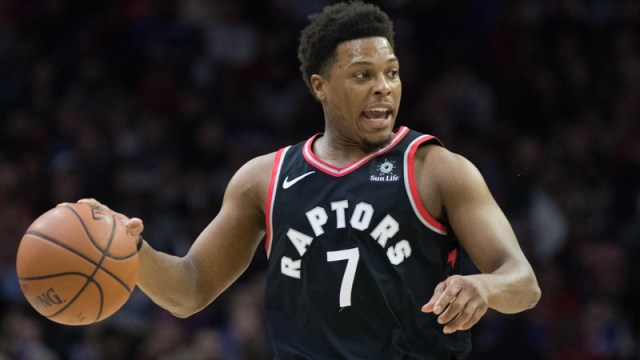 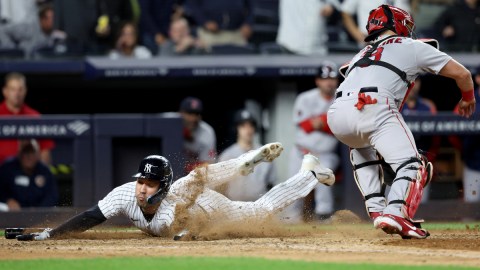