When Boston’s lineup was released ahead of its game against the New York Mets on Wednesday, Red Sox fans wondered why Xander Bogaerts was missing.

The shortstop has been a bright spot for the team through its first five games with one home run and five RBIs, so it was unclear why he wouldn’t start.

Red Sox manager Ron Roenicke revealed on his Zoom pregame press conference that Bogaerts is “a little banged up” from making a diving play against the Mets on Monday. He stretched out to make the tag at third and remained on the ground for a few minutes, appearing to be in a bit of pain, but continued on.

Bogaerts told his manager he was “good to go” for Wednesday’s game, but Roenicke was thinking about the future.

“Yesterday he played, we knew he wasn’t 100 percent yesterday,” Roenicke said. “He told me he was good to go, but I’m thinking about five more games before our off day. We thought today was a good day to do it and hopefully he’ll play the next four and then have that day off.”

Boston is off to a rough 1-4 start, meaning it certainly will need Bogaerts to be close to 100 percent so he can help the Red Sox get back on track. 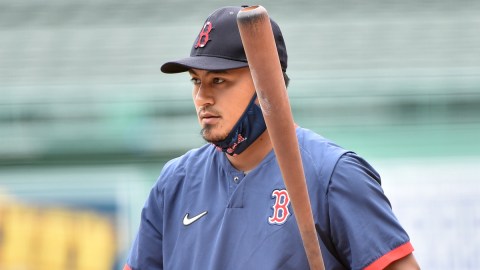