The stage is set, mostly, for the first round of the NBA’s Eastern Conference Playoffs, and the third-place Boston Celtics are matched up to play the rivaled Philadelphia 76ers.

Entering the NBA bubble, this was not an ideal road to the NBA Finals for Boston, who had only defeated the Sixers in one of four matchups during the regular season and who’s small lineup has struggled to defend bigs, never mind some of the best in Philadelphia’s Joel Embiid and Al Horford.

But now, Ben Simmons likely is out for the rest of the season, and star center Embiid is facing pesky injuries of his own. So, all of a sudden, having to go through the Sixers doesn’t look so bad after all.

But after Philadelphia’s win over the Washington Wizards on Wednesday, forward Tobias Harris had a simple message in regards to his mentality facing a tough series against Boston.

Sixers Tobias Harris on matching up with the Celtics in the first round of the playoffs: “My thoughts are, let’s win.”

He wasn’t the only 76er to comment on seeing the Celtics first round, as former Boston center Horford promised for a fun series. 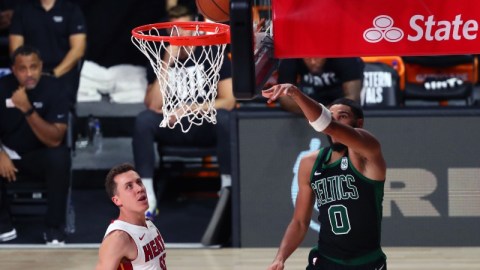