With Tom Brady gone and Cam Newton, Jarrett Stidham and Brian Hoyer competing for the New England Patriots? starting quarterback vacancy, there has been an uptick in interceptions on the Gillette Stadium practice field this summer.

And much has been made over those turnovers because of the uniqueness of a quarterback competition in Foxboro. Stidham, a second-year pro, has thrown six interceptions through four practices. Newton, who signed with the team in July, has two. Hoyer, a journeyman who is in his third tenure with the Patriots, has just one.

Hoyer, despite trailing his competition in interceptions, downplayed training camp mistakes Thursday in a video conference call with the media.

?This isn’t a game,? Hoyer said. ?This is where we’re trying to figure out our teammates. People are learning. You’re trying to see what throws you can throw to certain people. I don’t ever really (interceptions). Obviously, we watch the film and I watch it again by myself every day. And you just go back and you’re learning. I mean, sometimes what you learn in training camp is what helps you figure out what you’re going to be able to do during the season. So, I don’t really look at that way. Every day you’re going out there to obviously perform the best you can, but also figure out what you have and what you can do.

?And so I think there’s a lot of it that goes into it that is ?All right, we have this route, I have this guy on this route, this guy’s covering him. I’m going to give him a chance on this route and see how it goes one way or the other.? And that’s how you learn. That’s how you learn your teammates. That’s how you learn their little nuances of how they run their routes. And obviously, with the rotation, we’re getting reps with everybody. So you’re constantly going out there with new guys and you just do what you?re coached to do and then when you get a chance to throw to a guy you’re trying to, I guess, kind of build that rhythm or compatibility with him, and then you come back and watch it and learn from that.?

The key is to not make the same mistake twice and show you?re growing from the miscues.

Patriots head coach Bill Belichick is keeping his thoughts on the quarterback battle close to the vest, though he did entertain the possibility of a quarterback platoon Wednesday.

Newton is the favorite for the job, but Stidham and Hoyer still appear to be in the mix based on training camp reps. 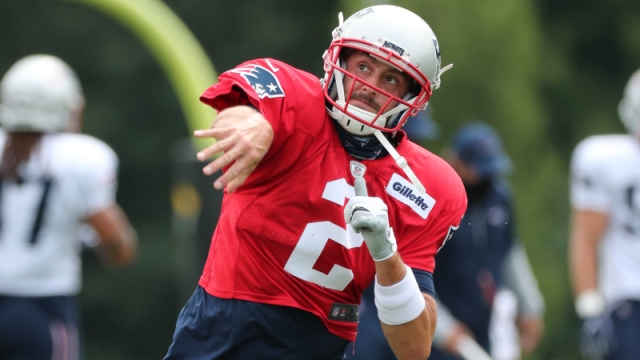