The reason the Boston Bruins and Carolina Hurricanes were playing the earliest postseason game in NHL history was because of a marathon overtime game the night before.

And while Game 1 of the Bruins and Canes’ first-round Stanley Cup Series didn’t require five overtimes, it did necessitate some bonus hockey, which was only fitting.

And it was Patrice Bergeron that secured the 4-3 victory for the Bruins, breaking the tie at 1:13 in the second overtime period.

The Bruins lead the series 1-0.

ALL SQUARE
The Bruins’ jump in the first period was better than it had been in previous opening periods since arriving in Toronto, and after conceding the first goal they drew level to go into the intermission tied at one.

Boston defense broke down after the Hurricanes gained the zone, and Carolina was able to whip the puck around with relative ease. Sebastian Aho fed a puck to Teuvo Teravainen, who then set Edmundson up for a one-timer from the point. The blueliner’s drive beat Rask to open the scoring at 13:02.

Eddy with an absolute laser! pic.twitter.com/X3CciQ2vG9

The Bruins got a late boost from their top line, who terrorized Carolina last postseason but has been off to a slow start in the bubble.

On a designed play off an offensive zone draw, Patrice Bergeron won a face-off and got the puck over to Brad Marchand. Pastrnak beelined for the far post while fighting off Jaccob Slavin, and Marchand shoehorned a pass through the middle of the zone to find Pastrnak, who quickly beat a sprawled out Mrazek to tie the game at one with 2:15 left in the period.

Pasta for breakfast? That works for us.

The Bruins outshot Carolina 9-4 in the first.

MORE OF THE SAME
Each side added a goal to finish the second period locked up at two.

Less than five minutes into the second, Coyle gave the Bruins their first lead inside the bubble. A loose puck in the air got knocked into Mrazek’s glove, but he was unable to hold onto it and freeze it. When the puck trickled away, Coyle was waiting for it with a wide-open net to bury the go-ahead goal at 4:38.

Coyle ??Back of the net

But any momentum the Bruins had was quickly wiped away.

The Hurricanes had challenged the Coyle goal for a hand pass (we think?), but the call stood. As a result, the Bruins went on the power-play for a Carolina delay of game, but it would be the Hurricanes that cashed in on the advantage.

McGinn intercepted a pass at the point and had a breakaway, and as he closed in he flipped to his backhanded and roofed the puck past Rask just 21 seconds after Coyle’s goal.

The Bruins got another power play later in the period and there also was a two-minute 4-on-4, but just the two goals would be scored in the middle 20 minutes. Boston held a 12-5 shots advantage in the frame.

TO OT WE GO
Continuing the trend from the previous two periods, each team had one goal in the third, sending the game to overtime tied at three.

The Bruins scored quickly into the period. Charlie McAvoy held the puck at the half boards in Boston’s offensive zone, but flipped it up and into the slot after McGinn closed in to pressure the defenseman. From one knee, Kase crashed and got the puck, then fired a shot on Mrazek, which he turned away with a pad save. But the rebound went to Krejci on the doorstep and the center nice tremendous patience with the puck, dancing around Mrazek before sliding it past him to put the Bruins up 3-0 just 59 seconds into the third.

A little under nine minutes later, the Canes got one back.

Vincent Trocheck won a battle along the boards in Carolina’s attacking end, then got the puck up to Fleury at the point. While moving left across the blue line, Fleury uncorked a wrister that weaved through a ton of traffic and beat Rask over his glove to tie the game at 9:49.

BERGERON WINS IT
One overtime period was not enough, but two was.

Shortly after the puck dropped for the second overtime, the Bruins got a rush. After gaining the offensive blue line, Marchand fed it to Pastrnak up the middle and Pastrnak slipped it to Bergeron on the right wing. Bergeron then fired the wrister past Mrazek at 1:13 in the second OT.

UP NEXT
The Bruins and Hurricanes will meet for Game 2 on Thursday evening. Puck drop from Scotiabank Arena in Toronto is set for 8 p.m. ET. You can watch the game on NESN, with pregame coverage beginning at 7 p.m on NESN+. 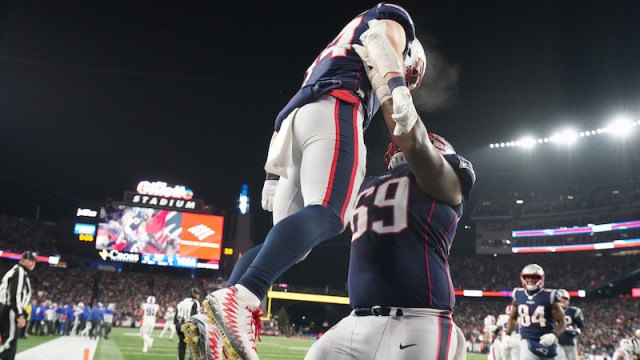 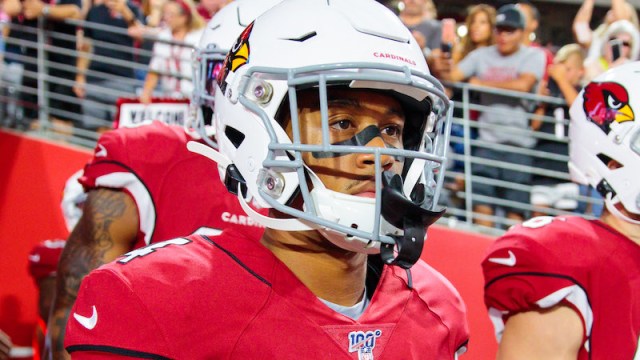