Normally, it isn’t wise to reach too much into a social media post, especially one shared by a member of the Patriots.

However, it’s hard to not ponder a potentially deeper meaning behind what Julian Edelman posted Tuesday afternoon.

The New England receiver featured himself and Cam Newton in a Justice League-themed post. Edelman was depicted as Batman; Newton as Superman — it was super corny.

Now, is it possible Edelman was just having some harmless, geeky fun? Sure, but it’s also easy to view his post as the effective end of the Patriots’ quarterback “competition,” whether he meant it that way or not.

Were Jared Stidham and Brian Hoyer still in the running for the starting gig, it’s hard to imagine Edelman posting something potentially painting himself and Newton as the faces of the franchise. The veteran receiver certainly has a longer leash than most on the team, but Bill Belichick still, in all likelihood, wouldn’t be happy.

All that said, it shouldn’t come as a surprise that Newton has seized control of the Patriots’ starting quarterback job. The 2015 NFL MVP recently has received the majority of the competitive reps in practice while Hoyer and Stidham both of have seen their roles reduced. Yes, Stidham is dealing with an injury, but those who have covered training camp have indicated Stidham has been shaky when on the field.

As for Edelman’s post, perhaps some view it as more innocuous than revelatory, but we would disagree. 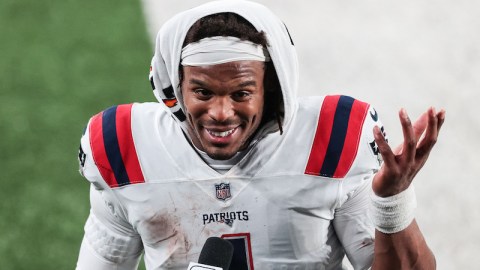