If you’ve followed the New England Patriots at all over the last month or so, you’ve probably read and heard all about the “energy” Cam Newton has brought to his new team.

But what exactly does that entail?

The dancing in stretching lines and boisterous post-play celebrations are part of it, sure. But Newton’s energetic approach to the game also can be seen through more subtle gestures.

One example: Newton, who joined the Patriots less than two months ago, already has personalized handshakes for each of his offensive teammates — skill players and linemen alike.

“We’ve had the same handshake for years now, just a bird signal,” wide receiver Damiere Byrd, who played with Newton for four seasons in Carolina, said Wednesday in a video conference. “Obviously, my last name is Byrd. … Everybody in the huddle has their own unique handshake that is specific to them. And it’s just a way to get the energy going and get the vibe going and really kind of just pull everybody together.”

Left tackle Isaiah Wynn has known Newton for just a few short weeks, and the two already have what Wynn called a “dope” shake.

“He just has his own unique handshake with everybody,” Wynn said. “He comes in and energizes everybody.”

Asked Wednesday about the genesis of these handshakes, Newton said he was inspired by watching a superstar athlete from another sport: LeBron James.

“I?m just gonna be honest with you, I kind of bit off somebody else?s swag with LeBron,” Newton said, smiling. “I saw LeBron years ago have different handshakes for every single person on the roster. And I was like, ‘Man, that?s pretty cool.’ “

The handshakes serve two purposes, Newton explained: boosting team morale and keeping the former NFL MVP on his toes. Remembering a dozen or more individualized greetings can’t be the easiest task, and Newton knows he’ll disappoint his teammates if he slips up.

“One handshake for one person kind of speaks to the relationship that you may have to that specific person,” Newton explained. “… But as I began to do that, I started realizing how certain handshakes just morph off of how you particularly know that person. So it’s just been so fun, and obviously for the guy to get to know me and understand my energy level, (I know) that it takes one time to do it and another time to not do it that somebody is going to say, ?Hey man, don’t forget my handshake.?

“We all have indirect and direct ways to hold each other accountable, and it keeps you locked in (during) practices so we can keep everybody?s energy level at an all-time high.?

Newton believes bringing energy to the practice field, locker room and any other team setting is “extremely important.” In his mind, a positive outlook is vital to navigating any season’s eventual roadblocks, which the 2020 Patriots are bound to face in Year 1 of the post-Tom Brady era.

In short, Newton wants his energy level — his “vibe,” he called it — to “more or less become the standard” in New England.

“Walking into this locker room, it?s been such a good energy here that I just want to make sure that I do my part,” he said. “Even though we may have a lackluster day offensively, it?s just my job as one of the default leaders in my position to make sure that everybody knows we have to become better. We have to make sure we hold each other accountable. And that’s all I’m trying to do each and every day.

“So for me, no matter if it’s coming up with a handshake, no matter if it’s just jumping up and down, no matter if it’s getting in somebody’s face to tell them a joke — those things may come off as me getting other people focused and ready, but more or less, it?s just me holding myself accountable more than anything else, because I go by a code and stick to the code of if you say something to somebody, you?d better make sure that you’re holding yourself in check, as well. And that’s what I’m trying to do.”

Newton appears to have taken a commanding lead over Jarrett Stidham and Brian Hoyer in the Patriots’ quarterback competition, monopolizing reps in 7-on-7 and 11-on-11 drills since last Thursday. Still, the 31-year-old said he does not view himself as the team’s starting QB.

“Absolutely not,” he said. “Every day is a workday for me, and that label is not important to me right now.”

In Stunning Turn, Nick Wright Admits He Was Wrong To Celtics’ Enes Kanter 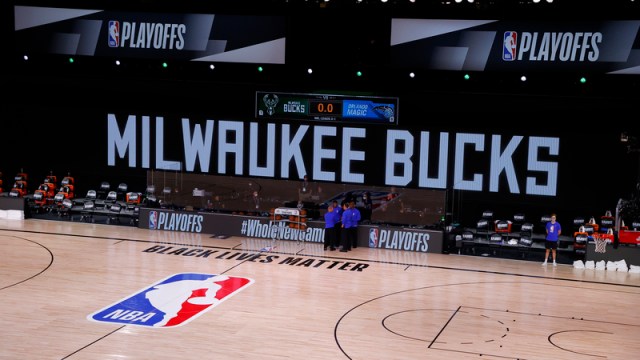 NBA Rumors: Bucks Boycott Game 5 Vs. Magic, Did Not Emerge From Locker Room