You only can make one first impression, and Cam Newton made a good one Sunday afternoon at Gillette Stadium.

Newton shined in his Patriots debut. The veteran quarterback completed 15 of 19 passes for 155 yards, but he was even more effective with his legs. Newton was the game’s leading rusher with 75 yards, and his two touchdowns on the ground helped lift New England to a 21-11 win over the Miami Dolphins.

The three-time Pro Bowl selection didn’t leave the field smiling after his strong performance, however. Newton was at the center of an end-of-game skirmish which, according to the star signal-caller, was ignited by Dolphins players reaching for his chain.

After the game, Newton trolled the Fins for their failed attempt.

Miami’s antics clearly frustrated Newton in the moment, but we can’t imagine he’s dwelling on what took place as the Patriots sealed their Week 1 win. The QB surely will be turning his focus to the Seattle Seahawks, who will host New England on Sunday night. 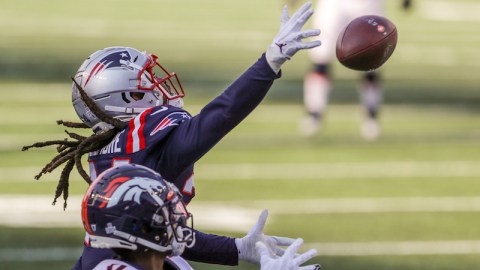