The Boston Celtics are headed back to the NBA?s Eastern Conference Finals.

The Celtics used an outstanding defensive effort to earn a 92-87 win against the Toronto Raptors in Game 7 of their Eastern Conference semifinal series Friday night.

Boston earned the victory in large part because of its defense, tallying 12 steals and five blocks. The Celtics forced 18 turnovers with 31 points off those turnovers.

The Celtics will play the Miami Heat at the Walt Disney World Campus in Orlando in the conference finals.

EXCITING START
The Celtics built a 12-point lead midway through the frame, but Toronto responded with an extended run of its own to take a 27-26 lead after the first quarter.

Boston led by 12 points with 5:22 left in the first before Toronto’s 20-7 run. The Celtics built their lead with a trio of 3-pointers, but watched it disappear as they settled for long-range shots and shot 28.6 percent (4-for-14) over the first 12 minutes.

Tatum was impressive in the first quarter, though, with nine points, seven rebounds and four assists. Fred VanVleet scored eight first-quarter points, while the Toronto bench was crucial in its late run.

C’s MAKE A RUN
Things were looking a little shaky midway through the quarter with Toronto building a seven-point lead. The Celtics, though, responded with a 17-6 run in last six minutes to take a 50-46 lead at the half.

Walker was a key part of that. The Celtics point guard was passive at the start (0 points, 0-for-2 from the floor in his first 17 minutes) as the Raptors played a box-and-one on him. But he decided to create for himself, hitting a pair of pull-up jumpers during the run.

A (SOMEWHAT) BETTER THIRD
There’s something about the third quarter that hasn’t sat right with the Celtics, and it continued Friday as the Raptors cut the Boston lead to 72-71 heading into the fourth.

Boston started the period with a Tatum 3-pointer, forced turnover which led to a Brown pull-up jumper and another Tatum trey not long after. Theis later collected an offensive rebound and scored, and blocked a shot on the next possession. That was all within the first four minutes. And then it stopped as Boston didn’t score a basket for five minutes.

Toronto, on the other hand, answered with an 8-0 run to cut the C’s lead to one. The Raptors even took a 68-67 lead with 1:45 left in the quarter before a Walker jumper and Tatum 3-pointer on consecutive possession regained the Celtics the lead.

FINAL 12 MINUTES
Boston opened with a 7-0 run to start the quarter.

Walker hit hit first 3-pointer, Theis took a charge which led to a Theis basket on the other end. The C’s then forced another turnover which led to a Tatum transition layup.

Struggles at the free throw line halted the Celtics on putting the game on ice sooner, but Walker made a pair with 7.9 seconds left to give Boston a two-possession, 92-87 lead.

PLAY OF THE GAME
Marcus Smart is incredible. 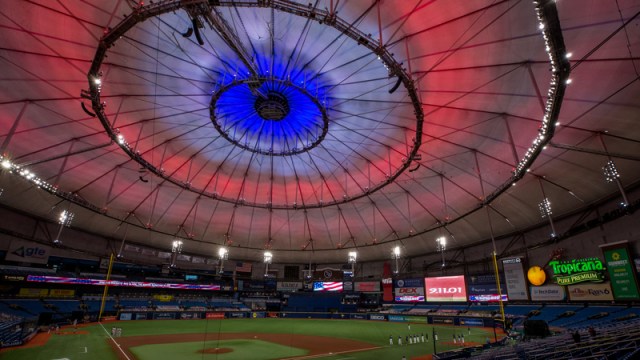 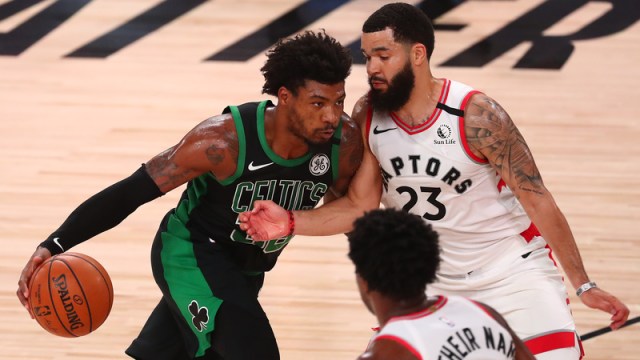