If Game 1 of the Eastern Conference Finals is any indicator, this is going to be one heck of a series.

It took overtime, and one heck of a block from Bam Adebayo, but the Miami Heat managed to grab a 1-0 series advantage Tuesday after their 117-114 win over the Boston Celtics.

The Celtics led by as many as 14 points in the fourth quarter, and their first-quarter defense was suffocating. But some brutal offensive sequences down the stretch allowed the Heat, who hung around all game, to earn the win.

Marcus Smart drained six 3-pointers in scoring 26 points. Jaylen Brown had 17 points with five rebounds. And though Kemba Walker had another rough game shooting, he pieced things together at the end to finish with 19 points and six assists.

SO FAR, SO GOOD
Smart’s hot hand followed him into the Eastern Conference Finals, as he opened the game with a 3-pointer and a long jumper to give Boston an early 5-0 lead.

Tatum and Brown joined in on the fun, too, to go off on a 12-3 run and instigate a Heat timeout.

With just over six minutes in the quarter, Theis had a big block on Bam Adebayo’s attempt at a dunk, and it paid off on the other end, as Tatum assisted Theis on a slam of his own in transition to go up 14-5.

The Celtics defense was relentless through most of the first quarter, but the Heat managed a 9-0 run to cut their deficit to eight points with a minute left in the quarter.

It could have been worse, however, as Miami shot just 27.3 percent from the field and 33.3 percent from beyond the arc. It was their lowest scoring first quarter of the postseason, and Butler was held to just two points.

Boston, meanwhile, shot 52.6 percent from the field and 50 percent from long range. Smart led the offensive effort in the frame with 10 points, followed by Tatum with eight points.

DRAGIC HAS ARRIVED
Brad Wanamaker made it 32-29 early in the second with an and-1 after a gritty baseline reverse through contact.

And Tatum extended that lead with an absolutely wild hook.

But Goran Dragic found his stride in the second as Miami picked up their pace of play, cutting Boston’s lead to 36-31 with 7:13 on the clock in the second.

Dragic had 16 points on 7-for-10 shooting and was 2-for-3 from beyond the arc. And while the Heat suffered through one of their worst shooting percentages of the postseason in the first quarter, the second frame saw their best.

Butler gave Miami their first lead of the game, 39-38, on a contested shot assisted by Tyler Herro. But Butler missed the and-1 free throw and the Celtics took the lead back on the other end.

The quarter was back-and-forth from there, but the Celtics couldn’t quite stop the Heat once they found an offensive rhythm.

Tatum carried Boston through the second quarter, with solid contributions from Wanamaker, too. Fortunately, after a late timeout within two minutes of halftime, Brown and Smart woke up.

Smart hit a 30-footer down the stretch, sandwiched between two 3-pointers from Brown, one of which tied the game for Boston on its last possession of the half.

The first half ended in a 55-55 tie, with Tatum’s 15 points leading Boston. Smart had 13 points while Brown stepped it up to finish with 10 before the break.

SMART WAKES HIS TEAM UP
The Heat started the second half with a 6-1 run to make it a 61-56 game, and immediately after, Brad Stevens called a timeout with the offense facing a Miami zone defense.

Finally, another Smart triple after the timeout made for the Celtics first field goal of the half.

That perhaps woke up Kemba Walker, who was 1-for-8 shooting from the field to that point. He took the lead back for the Celtics with a 3-pointer.

A few sequences later, Smart delivered a momentum shifting pull-up jumper in transition to take a 65-61 lead. And Robert Williams kept it there for a bit with a big block.

The Heat hung around, but Tatum took over the game with eight points in the last three minutes of the quarter.

Tatum’s tough defense on the Heat’s last possession forced the turnover, and Boston closed out the quarter on a 13-2 run. Miami was held to just 16 points in the frame, while Smart had 10 points in the third alone.

TOO CLOSE FOR COMFORT
The Celtics kept that same energy in the fourth, with Walker, Brown and Tatum all hitting shots to open the quarter. Then, Wanamaker made a great play to force a Bam Adebayo turnover, which he converted on the other end to give the Celtics a 10-point lead.

Still, the Celtics didn’t make it easy on themselves, because Dragic didn’t let them. But with just under four minutes left in the game, Tatum pulled down a defensive board that helped him notch his fifth straight double-double.

Tatum hit a free throw to tie things up, but the Celtics offense was abysmal down the stretch, and they didn’t take advantage of having the final possession of regulation.

The game went to overtime tied up at 106.

FREE BASKETBALL
Tatum and Walker helped give the Celtics a four-point lead to start overtime, but Theis fouled out of the game, and they were forced to go with a small lineup.

Adebayo made them pay, taking a 113-110 lead just moments after Crowder hit a wide-open 3-pointer.

Walker, cold all night, gave the Celtics a boost with a signature step-back jumper, but Butler took the momentum right back.

PLAY OF THE GAME
Credit where credit is due…

UP NEXT
With Game 1 in the books, both teams will get a day of preparation before Game 2 on Thursday, Sept. 17. Tip off is scheduled for 7 p.m. ET. 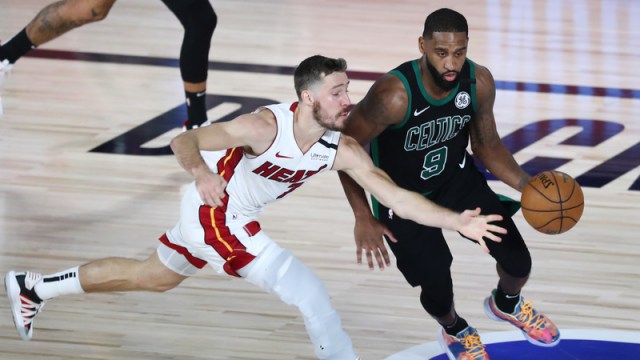 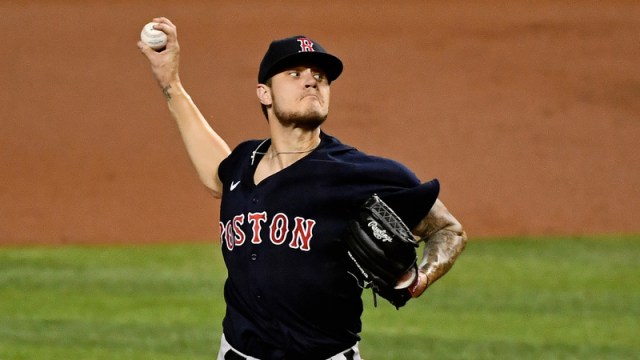