It won’t be easy for the Las Vegas Raiders to keep their hot streak alive Sunday, and head coach Jon Gruden knows it.

The undefeated Raiders travel to New England in Week 3, and Gruden called it a “tough operation” planning to face Cam Newton when the QB has only played two games in a Patriots uniform.

“It always is when you play against Cam Newton and the New England Patriots,” Gruden said. “And now that they’ve joined forces, it’s double trouble for every defensive staff and every coach and every team that comes in there.”

The Raiders will rely on what Newton has done in the past and how the Patriots use certain personnel groupings. Gruden is still amazed at what Newton can accomplish on a football field with all of the hits he takes as a runner and passer.

“They run power plays to his left, taking people on with his right shoulder,” Gruden said. “He gets up and throws a bullet across the field. I don’t know how he does it.

“I haven’t seen many guys walk through my doors that look like Cam. I call him ‘Slam.’ Slam Newton. That was the nickname I gave him. He is a power forward playing quarterback. He’s oversized for the position. He’s gifted so much athletically. It’s incredible what he’s accomplished (with durability). It’s really impressive. I’m happy to see him healthy, again, by the way.”

The Patriots have run the ball 67 times and passed just 63 times in two weeks. Newton leads the Patriots with 26 carries for 122 yards. Tom Brady only carried the ball 26 times as the Patriots’ starting quarterback all of last season.

The Patriots and Raiders face off Sunday at 1 p.m. ET. The Raiders are on a short week after beating the New Orleans Saints on Monday night. 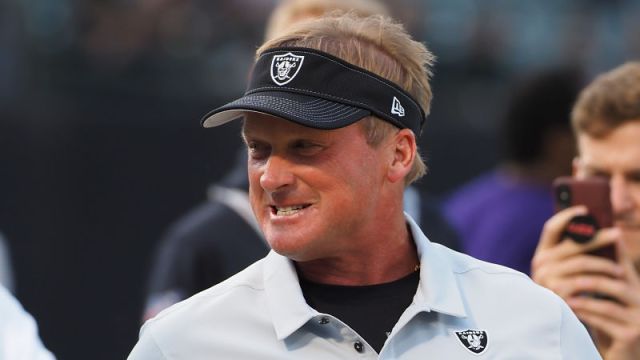