The Boston Red Sox on Sunday rallied late in their game against the Toronto Blue Jays, but they couldn’t quite pull off another comeback for the second-straight day.

Instead, Boston fell 10-8 to Toronto, dropping the five-game series in the process. But there were silver linings.

The Sox hit four home runs Sunday thanks to Kevin Plawecki, Bobby Dalbec, Jose Peraza and Xander Bogaerts. And Dalbec, who made his major league debut just one week ago, notched his third homer in seven games.

As for manager Ron Roenicke, seeing his team not only jump out to an early lead, but then come alive to attempt two consecutive comebacks, is promising.

“No doubt, good start with the offense,” Roenicke said in his postgame Zoom conference. “It’s nice to get that lead which is what we talk about a lot. And the offense I thought was really good today but it’s tough when you get behind and I’m sure (Toronto’s) side was saying the same thing thinking they had a lead and we kept coming back. So, tough day for our pitchers.”

The fifth and sixth innings were brutal for Boston, with Toronto batting around their order in both frames.

And with the two home runs keeping the Red Sox in contention, Roenicke’s plans to preserve the bullpen by throwing out a position player to close, and thus save Marcus Walden, were tossed out the window.

It’s hard when things play out like that, but Boston still was able to save Matt Barnes’ arm. And all things considered, it’s better to still in contention late in the game.

Because the offense is bringing this team back to life.

“We’re scoring early, which is great,” Roenicke said. “We always want to do that, and then, we’re not giving up. So we get behind, but keep coming back and that’s a really good sign, so I’m hoping we can continue this. And it’s fun. The energy on a team is because of the offense. That’s what brings excitement and that’s what brings energy in.”

Here are some other takeaways from the game:

— Yairo Munoz has dazzled thus far for the Red Sox, recording nine hits in five games (including three doubles and a home run) with four runs and four RBI.

After hitting a walk-off to secure Boston’s exciting 9-8 win over the Blue Jays on Saturday, he kept that production going Sunday with a lead-off single in the first.

But Jonathan Arauz replaced him immediately due to injury. Munoz later was diagnosed with a right hip strain. Apparently, he tweaked something right out of the batter’s box.

“Munoz is coming in tomorrow to be examined to see how long we think he’s going to be out,” Roenicke said.

— Plawecki was hit on his hand by a pitch during the seventh inning of the game and needed to be checked out. Fortunately, X-rays came back negative, per Roenicke, and he’ll be re-evaluated tomorrow.

“I thought I broke it,” Plewecki said in his postgame Zoom call. “I’ll be honest with you, but the big man upstairs was looking out for me, thank goodness.”

Hopefully, he’s OK, because Plawecki has been a bright spot for Boston when he starts at catcher.

“He’s done a really nice job for us,” Roenicke said. “We talked about maybe getting him out there a little bit more. I don’t mind at all, for sure. It’s hard when you have what you consider your starting catcher and you then all of a sudden you give someone else more playing time, and it’s not anything that (Vazquez) is doing, it’s just Plawecki is playing that well and swinging the bat that well. So we’ll talk about it, we’ll see, but I really like what he’s doing.”

— Roenicke felt great about Nathan Eovaldi’s progress with the bullpen he threw Sunday, and the hope is he’ll make a return in either the upcoming series with the Tampa Bay Rays or Miami Marlins.

— The Red Sox get a day off Monday, before returning to action Tuesday for a double-header against the Philadelphia Phillies. First pitch from Philadelphia is at 4:05 p.m. ET. 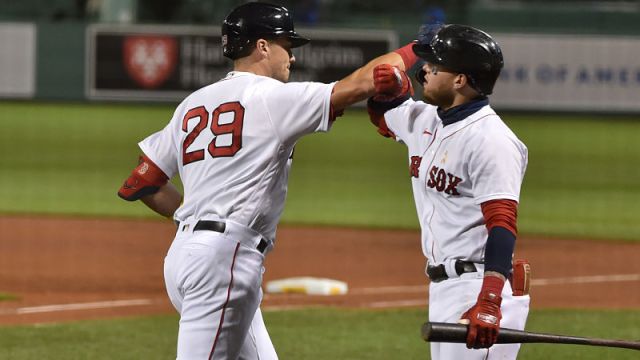 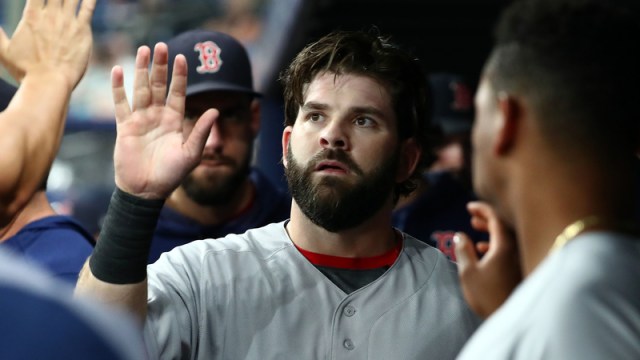