The Celtics selected the 6-foot-6 sophomore wing out of Vanderbilt with the No. 14 overall pick Wednesday, their first selection overall.

Nesmith easily was the best shooter available, and one of the best of his draft class, which is exactly what the doctor ordered to come off the bench to space the floor and provide some offensive production for Boston.

Let’s get to know the newest Celtic:

Nesmith is a bit of an old soul
Unlike most kids his age, Nesmith is an old soul. Dare we say a little nerdy? But in a good way. According to a profile in the “Post and Courier,” he’s never been on Twitter and was wearing short, tight basketball shorts before it was cool again. Instead of listening to newer rap, Otis Redding is one of his favorites. Yes, Otis Redding the 60s soul singer. He’s also never had a steady girlfriend, but who has time for that when you’re as focused as Nesmith is to achieve his goals?

Nesmith didn’t initially have a ton of Division 1 interest
The Charleston, S.C. native was called up to the varsity basketball team at the Porter-Guad School as an eighth grader, but still received no Division 1 offers from high-major schools until his senior year. For that reason, he started planning for his life after basketball at an early age.

In 2017, he told the “Post and Courier” he had plans to pursue a career as an engineer or entrepreneur, and that commitment to his education is why he chose Vanderbilt:

You can?t play basketball your whole life. There?s so much more to the world than playing basketball. I love playing the game, my dream is to play in the NBA, but I want to be known for more than just being a basketball player.

We have a feeling he’ll get along great with Jaylen Brown.

Smarts run in the family, and Nesmith already is familiar with Boston
Hard work is a common theme in the Nesmith house. His older brother, Eddie, is a student at Harvard University studying cellular biology.

Nesmith beat out Zion Williamson for a prestigious award
In his senior year, Nesmith won his third state title and was named the Gatorade Player of the Year for South Carolina… over Zion Williamson, who was the No. 1 overall pick of the 2019 NBA Draft.

He apparently is quite the outdoorsman
According to Ben Rohrback of Yahoo! Sports, Nesmith can drive a tractor, build chicken coops, dig out ponds and cut down trees. Maybe if he decides to buy a house in Massachusetts, he’ll consider sacrificing a long commute to reside in the beautiful Berkshires to live his best life. 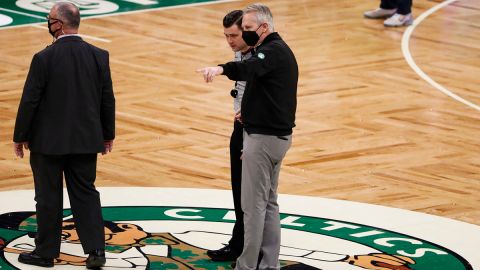