Patriots Mailbag: Will Sony Michel Maintain Any Role In Return To Roster? - NESN.com Skip to content

The New England Patriots saw their clear need at wide receiver and took steps to address it this week.

On top of trading for Isaiah Ford and signing Donte Moncrief to their practice squad, the Patriots also reportedly put in a waiver claim for San Francisco 49ers 2018 second-round pick Dante Pettis.

Pettis might have helped the Patriots. But if they really wanted him, then they would have traded a draft pick to the 49ers before San Francisco waived him. The fact that the Patriots sent a 2022 conditional sixth-round pick to the Miami Dolphins for Ford showed they value him more than Pettis.

Also, it wouldn’t be shocking if Pettis, who was claimed by the New York Giants, became available again. There’s no guarantee that New York will hold onto Pettis long-term.

@mailliam18
Damien Harris has put up two 100 yard rushing games this year in games the Pats lost. With that kind of production/efficiency do you think Michel takes a back seat even when he is 100%?
I would activate Michel off of injured reserve to serve as insurance, but I wouldn’t make him active on gameday unless Damien Harris, Rex Burkhead or James White suffers an injury.

Harris and Burkhead are better and more versatile players, and Michel’s skillset is redundant with those two running backs healthy. What can Michel do that Harris or Burkhead can’t? And he’s not as consistent or experienced as a pass catcher.

@Pats62
-Does BB get credit for Meyers, if he turns into a Player?
-But then Harry Bust and the same for Harris and Sony?
-Does not matter where drafted or How you get a Player.
-Just as long as you make up for it elsewhere.
The same could be said for Bill Belichick hitting on undrafted free agent JC Jackson but not second-round pick Duke Dawson.

The problem with the logic is that the Patriots could have drafted better players at different positions than N’Keal Harry, Sony Michel or Dawson.

It’s great to hit on undrafted free agents and third-round picks. But the misses aren’t negated just because good players are found later.

@christie_fin
What record do you think we need to get to for Bill to play Stidham just to see what he?s got and if he can be a starter in the league ?
For Jarrett Stidham to play, one of two things will have to happen, in my opinion:

1. Cam Newton will have to struggle consistently over a two- or three-game stretch.

2. The Patriots have to be mathematically eliminated from the playoffs.

I can’t see Bill Belichick turning to Stidham if he thinks Newton is the better option unless the Patriots are out of it. So, I don’t know if there is a specific record to identify.

I do believe the Patriots need to start Stidham at some point this season unless Newton proves he’s New England’s starting quarterback of the future. To this point, I don’t believe Newton has done that.

@GeeneyC
Is there something specific about the way the college scouting department or process is set up that leads the Patriots to hit on so many undrafted free agents and miss on early round draft picks? #askdoug #patriots
One element is that no matter what the college scouting department says about players, Belichick has final say. So, when you see the Patriots going way off the board with certain picks, that could be a Belichick guy.

@schimelmitz
Any probabilities to have a crowd in foxborough this season? Do you see Cam or Stidham next year? #MailDoug
I don’t believe there’s a strong chance we’ll see fans at Gillette Stadium this season with COVID-19 cases rising in Massachusetts.

I would lean towards neither Cam Newton nor Jarrett Stidham as the Patriots’ starter next season. Newton would have to improve significantly over the final nine games of the season, and Stidham would have to play like an absolute superstar if he ever gets a chance to start.

I honestly think Jimmy Garoppolo has a pretty high chance of being the Patriots’ starter next season. It seems like the San Francisco 49ers are ready to give up on the Patriots 2014 second-round pick, and Bill Belichick and Josh McDaniels always liked him. It would make the Patriots’ decision to trade Garoppolo in 2017 look a lot better. The Patriots still kept Tom Brady through 2019 and can potentially go back to Garoppolo in 2021. This season was probably going to be an unsuccessful one for the Patriots no matter who was at QB.

I do think the Patriots should still draft a quarterback even if they trade for or sign Garoppolo.

@StevePolanco325
Ideal QB out the draft besides Lawrence, Fields, and Lance?
It seems like BYU’s Zach Wilson is regarded as the next best quarterback prospect. After Wilson, it’s Florida’s Kyle Trask and Alabama’s Mac Jones, among others.

The Patriots are probably too good to land Clemson’s Trevor Lawrence, Ohio State’s Justin Fields or North Dakota’s Trey Lance unless they trade up. So, they’ll probably be picking from the second field of quarterbacks.

Wilson, Trask and Jones all have been extremely efficient this season while avoiding turnovers. We’d probably give the edge to Wilson because of his athleticism. 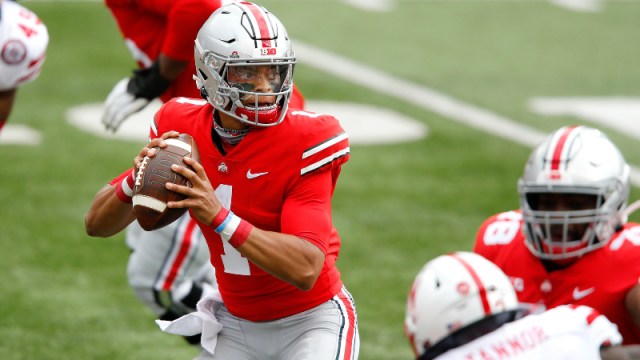 @tayfieux
Is cereal soup?
No way.

@MattSturtevant4
How u doin today doug
I’m all right. It’s a tense year/week for everyone.

@CupAJoeK
Have you seen anything from the Jets that would make this a competitive game as opposed to a jumping off point to a successful second half of the season? #mailDoug
Not really, honestly. If the Patriots lose Monday night, then they should be all-in on a tank for Trevor Lawrence.

@neteamen22
Doug – maybe not a question but observation you can comment on! Seattle game ended on one yard line, KC winnable but Hoyer sacked and strip sacked, Buffalo fumble on 15 yard line with 30 seconds left! A few plays and this season looks totally different going into this week.
Agreed. It’s been an unlucky offseason and season for the Patriots. They were due for one.

@YoustonAwlers
If you had to guess right now, where are the Patriots picking in the first round of the 2021 draft?
Somewhere in the teens. 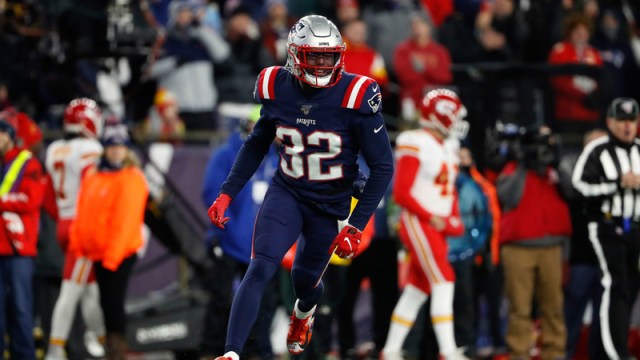