What We Learned In Patriots 30-27 Comeback Victory Over Jets - NESN.com Skip to content

Early in the 2020 NFL season, the New England Patriots had supposed “moral victories” in losses to the Seattle Seahawks and Kansas City Chiefs.

Well, the Patriots just had a demoralizing loss — if such things exist — in a much-too-close 30-27 win over the New York Jets on Monday night.

This Patriots team is 3-5 now and probably isn’t going anywhere. But they did win.

The Patriots will probably get slightly better when players like Lawrence Guy, Stephon Gilmore and Ja’Whaun Bentley get healthy and return. But, honestly, this team probably isn’t going anywhere. They’re not playoff-bound unless they nearly run the table, and they have an incredibly difficult schedule coming up. If they’re barely beating the Jets, then they’re probably not winning many of those games.

On Monday, it wasn’t the Patriots’ offense that struggled. It was their supposed biggest strength, the secondary, which let Jets quarterback Joe Flacco complete 18-of-25 passes for 262 yards with three touchdowns and one interception.

Patriots cornerback JC Jackson had a game featuring the highest of highs and the lowest of lows, letting up four catches on 10 targets for 97 yards, two touchdowns and a defensive pass interference penalty while also intercepting and breaking up passes. Jackson had played like one of the NFL’s best No. 2 cornerbacks while lined up across from Gilmore since 2018. He was solid last week against Stefon Diggs as the Patriots No. 1. This game hurt the notion that he could be a No. 1 cornerback if Gilmore leaves this offseason, however.

Jason McCourty let up four catches on five targets for a touchdown with a defensive pass interference penalty.

It definitely wasn’t all awful, but how much does that matter when you barely beat the now 0-9 Jets? Jakobi Meyers only continues to reinforce the fact that he’s clearly the Patriots’ best wide receiver and no one should have any idea what coaches were thinking by keeping him on the bench through the first six weeks of the season. He had 12 catches on 14 targets for 169 yards, outpacing the Patriots’ next-leading receiver (Damiere Byrd) by 104 yards.

Quarterback Cam Newton had one of his more efficient games, going 27-of-35 for 274 yards with no turnovers and two rushing touchdowns.

The Patriots ran the ball well, picking up 159 yards on 41 carries with three touchdowns.

They showed resolve and never gave up in a game they trailed twice by 10 points.

But, I mean, it was against the Jets. The Patriots were favored by 10. They barely squeaked by a team that should be trying to lose. This one didn’t prove anything other than the fact that the Patriots are not the worst team in the NFL. 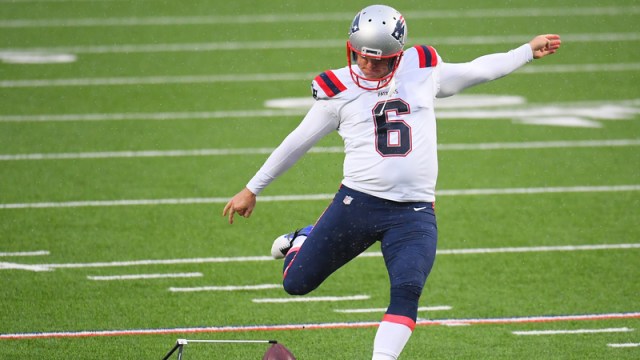