Celtics Notes: Payton Pritchard Was 'Everything And More' In Win Vs. Pacers - NESN.com Skip to content

The Boston Celtics were in the same position against the Indiana Pacers on Tuesday night as they were Sunday: with a first-half lead squandered by a horrible third quarter.

It wouldn’t end the same way though, and coach Brad Stevens put faith in a rookie to give them a spark in the 116-111 win.

Payton Pritchard’s body of work thus far earned the trust of his coach and teammates to play a lot of minutes down the stretch, despite the Celtics’ small size against the Pacers’ two 7-footers.

“He’s poised off that stuff, he makes the right play, he’s deceptive. He’s a guy that knows how to play,” Stevens said of Pritchard in his postgame media availability. “We’re awfully small at times but he did a good job both ends.”

Pritchard had eight points in the final frame alone, and finished his performance with 10 points, five rebounds, five assists and a steal.

“Payton is the GOAT, man,” Brown said postgame. “Payton came in with the confidence. Definitely needed a spark coming off the bench and Payton was everything and more for us tonight. We’re going to need more guys to continue to step up but excellent job from Payton Pritchard, man. Kid can play, and we look forward to him and other guys stepping up in the future.”

The 22-year-old’s game transitioning so well to the NBA has been one of the biggest storylines of the Celtics’ new season.

His ballhandling allows him to push the pace and up the tempo to open up shots for his team, and Pritchard said their belief in him already is huge for his development.

“Having that confidence from your coach and also from my teammates, it means the world to me because it can allow me to keep growing as a player and being able to help this team when I can,” Pritchard said after the game. “Coming off the bench I want to be able to provide a spark to either get the team going or help them build more of a lead. And I’m all about winning. That’s why we play this game. I want to win.”

Here are some other notes from Tuesday’s Celtics-Pacers game:

— It wasn’t the rookie leading the way in the fourth, though, as Jayson Tatum took over the game to finish with a 27-point, 11 rebound double-double with four assists and three steals.

All of his boards were on the defensive end, and this time, he made the go-ahead points that helped Boston win the game.

“I was just trying to be more aggressive, make the right play whatever it was and just help us make sure that we win,” Tatum said after the game. “I didn’t do that last game and I’m trying to make up for it.”

And while Tristan Thompson (14 points, 10 rebounds), Jaylen Brown (20 points, four steals) and Marcus Smart (17 points, five assists) were major contributors on offense, they unsurprisingly got it done on the other side of the ball too.

“We are an organization and team that wants to hang their hat on the defensive side of the game,” Brown said after the game. “In the fourth quarter I feel like we did a pretty good job and we did enough to win and we still have a lot of room to grow.”

Brown had a clutch late-game steal that lead to a transition layup that secured the win for Boston.

Playing with that urgency made the difference all around.

“We got a lot of guys in this locker room with a lot of fight inside,” Brown continued. “Even when you get down, when you continue to play and fight you’re always going to put yourself in a good chance to win. A lot of those guys stepped up big tonight. Yeah, we played with a little bit of desperation cause we were down 17 but we didn’t want to go out like that. So for us to respond that way was great for this group.”

Brown continued: “We feel like we let last game get away from us too and we didn’t want this one to get away. And we definitely picked it up on the defensive end, just intensity wise, and we pulled it out.”

— Despite the Celtics’ ultimate will to win, another third-quarter collapse was concerning. The Pacers outscored them 37-25 in the frame and the Celtics defense was getting shredded by Victor Oladipo.

Stevens credited it to Indiana’s physicality.

“Well I thought the Pacers were playing exceptionally hard heading into that quarter,” Stevens said. “That was as physical of a quarter in the third as I remember seeing in a long time. I thought our guys just kept at it. We had a couple really good contributions from the bench.”

Behind Pritchard’s 10 points off the bench were eight points and four rebounds from Robert Williams and seven points, three rebounds and an assist from Javonte Green.

“I think (the Pacers) made a couple of shots there to kick off the third that were OK defended but they were really physical,” Stevens said. “They came out knocking us all over the place and credit them for that. It got us off kilter a little and we settled down, spaced the floor a little bit better and were able to make plays. So on offense I thought it was that, and then on defense I thought we got back to where we want to play defensively. More reacting to the threat, more handsy, more aggressive on the ball. All the stuff that when we’re good, we’re doing well.”

Hopefully, that momentum continues for the Celtics. Stevens feels good about it.

“It’s a good team win,” Stevens said. “That’s a good basketball team. We’re not what we want to be but sometimes you gotta find a way to win.” 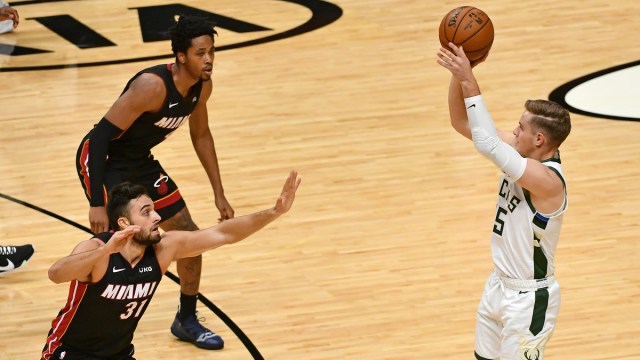