The New England Patriots’ issues on offense are multi-faceted, but one striking problem can be boiled down to a numbers issue.

At any given time, the Patriots only really have three usable “weapons” in their offense.

The Patriots gained just 179 total net yards Sunday in their 20-17 win over the Arizona Cardinals that was propelled more by special teams and defense.

Currently, when the Patriots are in 11 personnel (running back, tight end, three wide receivers), they typically have running back James White, wide receivers Jakobi Meyers, Damiere Byrd and N’Keal Harry and tight end Ryan Izzo on the field.

When the Patriots are in 21 personnel (two running backs, tight end, two wide receivers), they have Harris, fullback Jakob Johnson, Meyers and Byrd on the field.

So, what’s the problem? The Patriots only really have three players on the field who can stress the defense, and it’s the running back, Meyers and Byrd. And Harris has only caught three passes on the season.

Most quarterbacks aren’t forced to operate in an offense with a fullback, blocking tight end and ineffective third wide receiver. That’s what Cam Newton currently is dealing with.

Johnson is a good fullback, but the Patriots run the ball on 70.7 percent of his offensive snaps, and he has seven catches this season for 34 yards with a touchdown. No one should expect more production out of fullback, and he’s been solid as a run blocker, but he’s also third among all NFL fullbacks in snaps this season behind Kyle Juszczyk of the San Francisco 49ers and C.J. Ham of the Minnesota Vikings. He ranks 12th out of 13 fullbacks in PFF’s overall grades. He ranks ninth as a receiver and 11th as a pass blocker and run blocker. His job is not to catch or run with the ball. But he’s on the field a lot for a modern NFL fullback who doesn’t have Juszczyk’s versatility.

Izzo is similarly unproductive. He’s 34th among NFL tight ends with 193 yards on 12 catches without a touchdown, and 50 of those yards came on a failed but completed Hail Mary attempt in Week 11. He’s averaging just 1.1 catches for 17.5 yards per game. NFL defenses certainly need to cover him, but he’s not a threat in the passing game. He currently ranks 59th among tight ends in PFF’s receiving grade, 48th as a run blocker and 56th as a pass blocker.

Harry is the real problem. Because if the Patriots are going to deploy a fullback, a blocking tight end and a running back who doesn’t catch passes so heavily, then they need a top-of-the-line third receiver, and Harry is one of the worst in the NFL. He currently ranks 71st out of 74 wide receivers (with at least 40 targets) in yards per route run. He has 23 catches on 43 targets for 213 yards with a touchdown this season but was held without a catch on three targets with a drop, holding penalty and carry for a 2-yard loss Sunday against the Arizona Cardinals. He averaged less than a yard of separation per route run.

The 2019 first-round pick has gained over 41 receiving yards just once this season when he caught eight passes for 72 yards in Week 2 against the Seattle Seahawks. He’s averaging just 4.7 yards per target and 8.8 yards per reception in his NFL career.

Plenty of factors go into determining what makes a good NFL wide receiver. And this one is certainly subjective, but a quarterback has to show a willingness to target a wideout, and Cam Newton isn’t doing that with Harry. And it’s difficult to believe that the Patriots don’t have an upgrade over Harry, who currently ranks 110th out of 124 qualified wide receivers in PFF’s overall grades, on their roster.

Newton has shown trust in Meyers and Byrd. White is one of the NFL’s best pass-catching backs, and Harris has been a tremendous find as a running back. Harry is mostly just out there. And it might sound unfair to so heavily criticize what amounts to be a No. 3 receiver. This isn’t really even so much about Harry’s draft status and expectations as a first-round pick. The Patriots’ offense is struggling. They rank 19th in expected points added per play and 25th in expected points added per dropback. The Patriots’ running game is not a problem. They rank first in both expected points added and success rate per rush.

So, how do the Patriots fix their passing attack? They could limit Johnson’s snaps, but that would only hurt their biggest strength and any amount of unpredictability they have. They could try to find a more productive tight end. They currently have Jordan Thomas on the 53-man roster and rookies Devin Asiasi and Dalton Keene on injured reserve. It’s an option, but all of those tight ends are still playing catch up.

They could pretty easily put a different third receiver on the field, however. And they should at least consider switching things up and temporarily ending the Harry experiment.

The Patriots currently have Isaiah Ford and Gunner Olszewski on their 53-man roster and Donte Moncrief, Isaiah Zuber and Kristian Wilkerson on the practice squad. Moncrief very well could be an upgrade as that No. 3 receiver over Harry. He’s averaged 12.6 yards per catch and 7.1 yards per target over the course of his career.

Julian Edelman also could return from injured reserve at some point but his placement on the COVID-19 reserve list complicates matters. We’ve advocated for limiting Edelman’s snaps when he returns, but maybe the Patriots should just hand the 12th-year veteran Harry’s playing time and wait to see what the 2019 first-round pick could provide next season since it’s not really working in 2020. Harry only played 49.1 percent of offensive snaps this week against the Cardinals. That’s the lowest percent he’s played in a game he didn’t leave with an injury this season. That could be gameplan-related, but Harry started the season as the Patriots’ No. 2 receiver behind Byrd and now has found himself behind Meyers, as well. Perhaps a player like Moncrief or Ford could pass him too.

Newton seemed to get frustrated with Harry on a third-and-14 play Sunday late in the third quarter when the Patriots were trailing the Cardinals 17-10. Newton twice motioned for Harry to move upfield. It seemed that Newton wanted Harry to get to the first-down marker to move the chains.

Harry inched his way upfield but never actually made it to the first-down marker.

It’s worth debating whether Newton or Harry were in the right in this situation. Harry was going to be heading into coverage if he continued moving upfield. At the same time, Harry likely wasn’t going to get a first down if Newton threw it to him 10 yards shy of the 46-yard line. Also, midplay isn’t exactly the best time for a philosophical debate with your quarterback. If the quarterback is telling you to do something, it’s best to just listen and hash things out after the whistle.

Newton eventually did target Harry but the receiver had dropped his hands. Newton’s pass ultimately was off the mark and could have easily been picked off. Just a dismal play, altogether.

On the surface, Newton was the bigger issue than his receivers Sunday. He reverted back to showing a hesitancy to pass the ball unless a receiver was wide open rather than throwing his target open. He had issues with accuracy, as well, which is odd because ball placement had been a strong point for Newton over the last few weeks.

On third-and-5 with 7:29 left in the first quarter, the Patriots ran a rub-route concept with Byrd and Meyers.

This is when Newton decided to throw the ball:

This is what Newton was, therefore, throwing into:

Newton either needed to release the ball early when Meyers and Byrd both had separation early in their routes and before they were running into traffic.

Or after the rub had occurred, which would have left one of those receivers open. The Cardinals were rushing six, so it’s understandable why Newton might not have wanted to wait, though it seems like he still would have had time to get rid of the ball after the rub. But when he saw six rushers coming, he probably should have fired the ball out quickly when Meyers and Byrd were initially open but before they were in heavy traffic. It’s also worth noting Dre Kirkpatrick might have arrived a tick early to make contact with Byrd on the incompletion.

Newton ultimately helped the Patriots win with a clutch 14-yard option run to pick up a first down that led to Nick Folk’s 50-yard game-winning kick. But it would be easy to nitpick many of his throws.

This one was high and too wide. Byrd landed out of bounds.

This landed on the sidelines.

This was wide and dropped/broken up.

This was wide of the mark.

This was high and wide.

Newton waited for Byrd to complete his curl route (rather than throwing with anticipation) and hit to his receiver’s inside shoulder rather than his outside shoulder, allowing Kirkpatrick to pick this off.

And ultimately, yes, White still caught that last pass, but a high throw on a screen interrupts the timing of the play. These admittedly are nitpicks.

Newton was coming off of four straight solid-to-great performances, so one stinker is to be forgiven. We’re not calling for Newton to be benched. He could still be in the Patriots’ plans for the future. And he would absolutely benefit from having a few more dependable pass catchers at his disposal.

But in telling the full story, it would be unfair to only blame the Patriots’ struggles on the pass targets or Newton. There is a reason why Newton apologized to offensive coordinator Josh McDaniels after the game. The QB was not pleased with his performance.

White took the blame for missing a block early in the game that resulted in an interception too.

It’s difficult to fully assess Newton as a passer based on who’s seeing snaps in the Patriots’ offense. The Patriots’ pass-catching woes are more obvious since other players in the offense, like Meyers, Byrd, White, Harris and Rex Burkhead (before he was placed on injured reserve) have been productive and even exceeding expectations. 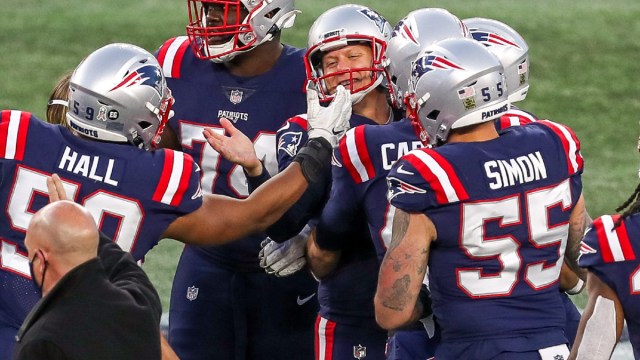 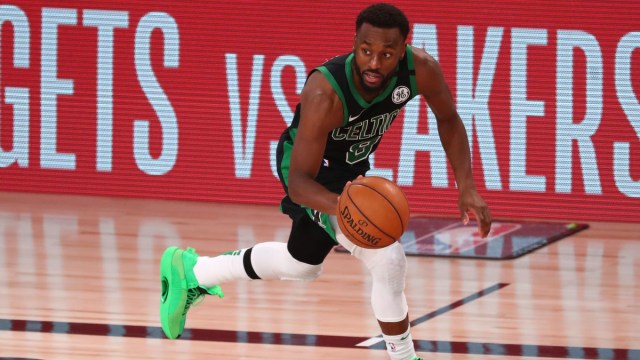 Kemba Walker Injury: Celtics Star To Miss Beginning Of Season Due To Knee