The news is good on Bruins winger David Pastrnak, but it is more uncertain with Ondrej Kase.

In Boston’s loss to the New Jersey Devils on Saturday, Kase left with an upper-body injury after a collision with Miles Wood. The injury happened in the second period, and Kase actually was questionable to return to the game, but didn’t.

“Upper-body for Kase, he’s out tomorrow still,” Bruins head coach Bruce Cassidy said after Wednesday’s practice, a session Kase didn’t participate in. “I don’t know how long it will be, to be honest with you. Again, with those things once he’s back on the ice I can give you a better idea.”

As for Pastrnak, he’s getting more involved in practices, all with a red no-contact jersey on.

That might be the way things are at least for this week, but after that he could swap the red sweater for a black or white one.

“He’s got a little bit (more time in the non-contact jersey) to go. So I would say best guess is he will be in with us through this week in a red, stay out of the heavy stuff. And then hopefully by next week he joins us and then see how close he is to game ready. So where that puts him exactly I don’t know, it’s probably a little early for that. But as I said before, he is ahead of schedule from the original mid-February date. How much remains to be seen.”

With Kase and Pastrnak out, Jack Studnicka, Jake DeBrusk and Anders Bjork likely will see elevated roles for the foreseeable future.

As for another injured Bruin, defenseman Matt Grzelcyk, he’s in a really good place for Thursday’s home opener. 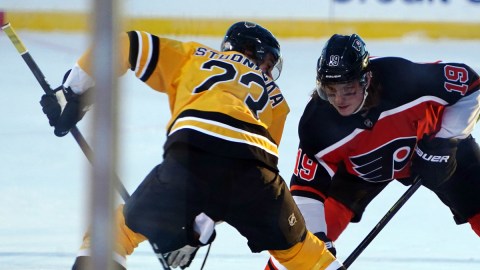