The Boston Bruins knew for a while that they would be without David Pastrnak to begin the season, and that Brad Marchand likely would be a game-time decision for the opener.

Craig Smith, on the other hand? His ailment is new.

The third-line right winger took part in Thursday’s morning skate ahead of the B’s opener against the New Jersey Devils. But Bruins head coach Bruce Cassidy later indicated Smith is a game-time decision due to a lower-body injury.

“He tweaked something earlier in the week,” Cassidy said over Zoom Thursday afternoon. “He didn’t feel great waking up this morning, so we’re going to have to obviously see how he is and if he can’t go we’re going to shuffle some lines.”

Smith has been skating on a line with Nick Ritchie and Charlie Coyle. In the event he can’t play, Trent Frederic likely will draw into the lineup, though it’s unclear where exactly he will fit in.

The Bruins signed Smith to a three-year deal on the second day of free agency. The 31-year-old had 18 goals and 13 assists in 69 games with the Nashville Predators last season. 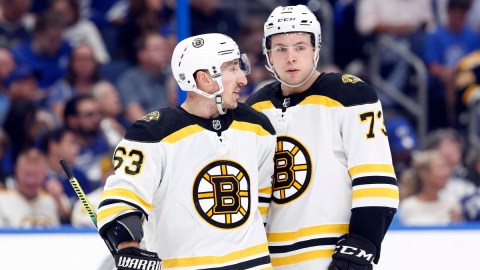