The 2020 fantasy football season has reached its conclusion, and there were both plenty of highs and plenty of lows.

Perhaps running back Derrick Henry or Dalvin Cook earned you a big payday at season’s end. Then again, maybe drafting receiver Michael Thomas or running back Christian McCaffrey in the first round halted your early-season expectations and caused you to miss out on the playoffs.

After keeping a close eye on the fantasy football fallout throughout the season, we figured it’d only make sense to close the campaign out in similar fashion.

So, with that said, let’s dissect winners, losers and surprises from the entire 2020 fantasy football season.

Winners
Derrick Henry, Tennessee Titans running back
The Titans running back led the league in rushing yards for a second consecutive season, but this time eclipsed the 2,000-yard threshold with 2,027 yards on 378 carries with a career-high 17 touchdowns. Henry tallied more than 2,100 yards from scrimmage and scored 450 fantasy points in half-point PPR leagues.

Dalvin Cook, Minnesota Vikings running back
Cook was second in the league in rushing yards, nearly 500 behind Henry but 400 in front of Jonathan Taylor, who finished third. Cook recorded 1,557 rushing yards in 16 games while adding 361 receiving yards on 44 receptions. The two-time Pro Bowler finished with 17 touchdowns (16 rushing) and tallied 418 points in half-point PPR leagues.

Davante Adams, Green Bay Packers wide receiver
Adams compiled 18 receiving touchdowns in 17 games, finishing the season with 300-plus fantasy points in half-point PPR leagues. While Adams ranked in the top-5 for receiving yards, he was behind leader Stefon Diggs. But the Packers wideout and his touchdown rate made him arguably the best fantasy receiver in 2020.

Travis Kelce, Kansas City Chiefs tight end
Kelce was second in the league in receiving yards (behind only Diggs), recording more yards (1,416) and touchdowns (11) than any tight end in the NFL. His 260 fantasy points in half-point PPR leagues were the most of any tight end, and gave owners a steady force in the starting lineup.

Losers
Michael Thomas, New Orleans Saints receiver
Fantasy managers who spent their first-round pick on the Saints receiver were left looking for answers all season long. Thomas did not catch a single touchdown pass this season. Battling injuries and being sidelined for a team-related punishment, Thomas played in just seven games and recorded a career-low 40 receptions for 438 yards. He scored 64 fantasy points on the campaign.

Dak Prescott, Dallas Cowboys quarterback
The Cowboys quarterback put together an insane fantasy season before his season-ending injury five games into the year. Prescott had eclipsed 450 yards passing in three straight games and was the early leader as the league’s top passer. He had nine touchdowns in four games before his unfortunate injury caused fantasy owners to hit the waiver wire.

Miles Sanders, Philadelphia Eagles running back
Sanders was probably a second- or third-round pick in most fantasy leagues, maybe even looked at as an RB1. The second-year running back underachieved greatly as he finished with 210 fantasy points. Sanders recorded 867 rushing yards with just six touchdowns (zero receiving scores).

Christian McCaffrey, Carolina Panthers running back
Potentially the No. 1 overall pick in your 2020 draft, McCaffrey was another who had his season decimated by injuries. The 2019 All-Pro tallied about 2,400 yards of offense last season and played in just three games. He finished with less than 400 yards of offense and six touchdowns for just 101 fantasy points.

Surprises
Justin Jefferson, Minnesota Vikings receiver
The Vikings wideout set league records for most receiving yards by a rookie in the Super Bowl era. Pretty crazy seeing how he may have been someone who was not even rostered on draft night. Jefferson finished with 230 fantasy points in half-point PPR leagues, registering 88 receptions and 1,400 yards with seven touchdowns.

Justin Herbert, Los Angeles Chargers quarterback
The Chargers signal-caller may have started the season on the waiver wire, but upon taking over for Tyrod Taylor, Herbet quickly depicted himself as a franchise QB and well-deserving of a roster spot. The No. 6 overall pick then made his way into the starting lineup, where he likely remained. Herbert tallied 555 fantasy points on the year with 36 touchdowns (31 passing) and 4,300 yards. 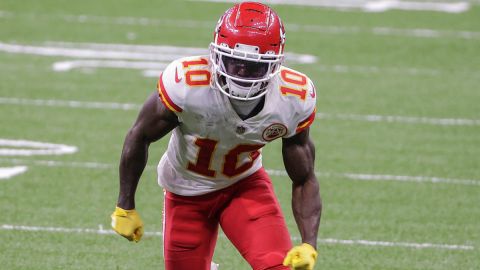