If you like classic NASCAR paint schemes (and the Chicago Bulls), you probably will love the paint scheme Darrell Wallace Jr. will run in next month’s Daytona 500.

23XI Racing, the NASCAR Cup Series team co-owned by Michael Jordan and Denny Hamlin, on Thursday revealed the car Wallace will drive when the 2021 season begins at Daytona International Speedway. The scheme, which Hamlin described as, “Clean, not messy, just like schemes used to be,” is red, white and black and features Doordash as the primary sponsor.

Take a look at the car in this video shared by Wallace, 23XI Racing’s full-time driver:

We agree with Hamlin. The paint scheme is easy on the eyes due to both its simplicity and its clear Bulls inspiration.

Wallace understandably is fired about the opportunity lead 23XI Racing’s first year in the Cup Series. Last month, Wallace, one of NASCAR’s most popular drivers, revealed the motto he plans to live by after three largely successful seasons as the full-time driver for Richard Petty Motorsports.

The 27-year-old still doesn’t have a victory on NASCAR’s highest level, but he does have nine top 10 finishes, including a runner-up finish in the 2018 Daytona 500. Wallace regularly was forced to use mediocre equipment while with RPM, but he, Jordan and Hamlin hope the move to 23XI Racing will give the Mobile, Ala., native the opportunity to show what he can do.

Hailie Deegan Under Fire For Using Slur During Virtual Race 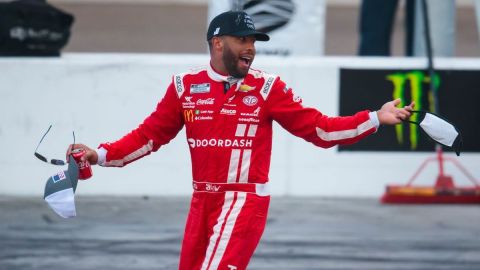