That’s my reaction to taking two on the chin over the NFL playoffs’ Super Wild Card Weekend.

Who knew Taylor Heinicke was the best quarterback on the Washington Football Team? Not head coach Ron Rivera. Heinicke?s performance caused Washington’s game with the Tampa Bay Buccaneers to sail over the total of 45 points.

The Baltimore Ravens and Tennessee Titans kicked and punted their way to a 20-13 battle for field position. Not ideal when you have the Over 54.5.

Weekends like that are going to happen in sports betting. When they do, it?s important to stay consistent and stick to your process. Losing can do weird things to the brain — try not to overanalyze and overthink. That’s when things tend to get really cloudy.

The first thing that comes to mind for this year’s College Football Playoff National Championship Game is that I wish the Buckeyes were at full strength. Alabama is growing stronger and Ohio State is going the other way.

By all accounts, Crimson Tide wideout Jaylen Waddle is going to re-enter the fold for an already loaded Alabama offense that’s averaging 48.2 points per game. I don’t care that Bama didn’t cover against Notre Dame. The Tide were up 28-7 after three quarters in a game they could have won by 30-plus if they tried at all in the fourth.

I loved Ohio State against Clemson in the Sugar Bowl because Clemson’s run defense was clearly nowhere near as strong as it’s been in years past. The Buckeyes blasted through open gaps all night for 254 yards on the ground. I’ll bet against history repeating itself when OSU faces Nick Saban’s defense.

The biggest concern is the health of Ohio State quarterback Justin Fields. We’ll know very early in this game just how serious his rib injury is. If Fields is not willing or able to turn upfield and make plays with his legs, that will change everything. The Buckeyes are at their best when their best player is a dual-threat weapon. I’m a little skeptical about his abilities after that hit.

There also are more rumors swirling about another COVID-19 situation in the Ohio State locker room. If the rumors are true and their defensive line has been affected, that could be crushing for the Big Ten champions.

At the end of the day, Alabama’s offense has too many weapons to fail. Heisman Trophy finalist Mac Jones is the perfect conductor for an attack that features Heisman Trophy winner DeVonta Smith, battering-ram tailback Najee Harris and two other strong receivers in Waddle and John Metchie. Three of Bama?s five offensive linemen should play in the NFL, plus offensive coordinator Steve Sarkisian?s creative schemes and play-calling have been sensational. One Las Vegas bookmaker told me the Crimson Tide are the best offense we’ve ever seen at the collegiate level. I don’t think that’s hyperbolic for one second.

Ohio State will battle and likely hang around for a few quarters, but Alabama’s depth and health will be too much down the stretch. Fields might be the most talented player on the field, but the most talented team is going to win the national title. 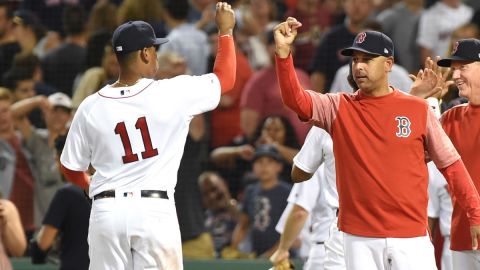