Two of the league’s best offenses will take the field Sunday in what we hope will be part of an entertaining NFL slate and profitable weekend for bettors.

The AFC South champion Titans will host the Baltimore Ravens at Nissan Stadium on Sunday, one of six contests set to take place in the league’s Super Wild Card Weekend.

The No. 5 seeded Ravens enter the AFC playoffs with an 11-5 record after concluding the regular season with five straight wins. The No. 4 Titans, who also enter 11-5, were a Week 17 game-winning field goal away from starting their postseason on the road. Beating the Houston Texans, however, propelled Tennessee to the division title and a first-round home game.

Here is a betting preview ahead of Baltimore-Tennessee:

BETTING TRENDS
Tennessee is one of two teams not favored despite playing at home this weekend. The Titans compiled a 7-9 record against the spread during the regular season with a .500 mark at home.

The Titans, however, are among the best teams in the league when playing the total. Tennessee cashed in on the over in 12 of their 16 games, including six of their eight home games. The Titans (6-1-1 over/under at home) were held under in just one game in Nashville.

The Ravens have compiled a 10-6 record against the spread, which is tied for second with the Green Bay Packers and Pittsburgh Steelers. Only the Miami Dolphins and Buffalo Bills tallied better ATS records. Baltimore had a 5-3 clip while on the road, as well.

Despite the league’s best rushing offense, though, the Ravens had trouble beating the total. Baltimore hit the over in just seven of their 16 games and were below .500 on the road with a 3-5 clip. 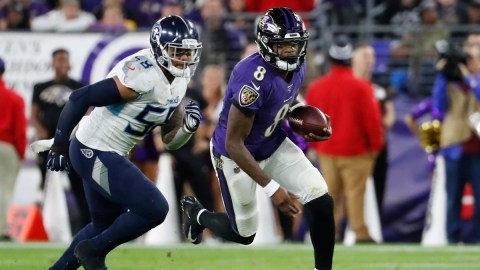 PICK: Ravens -3.5
Admittedly, this probably is a game we would stay away from, but since we can’t do that here we’re just a little more confident in the Ravens. Simply, Baltimore has the makings of a better team, which also has peaked at the right time.

The Ravens have found their rushing attack over the last five weeks, despite the fact it didn’t exactly come against playoff-caliber opponents. And while we’re not extremely confident in Lamar Jackson being able to lead Baltimore on a deep run with his arm, he did throw 60 passes for 365 yards against the Titans in the 2019 playoffs. That Tennessee secondary is much worse this time around, finishing the regular season 29th in passing yards allowed.

The Titans offense, on the other hand, is very good. But they will be met with a much tougher task as Baltimore’s defense ranked second in points allowed and seventh in yards allowed. Those number may be a bit inflated seeing how the Ravens benefitted from playing the Bengals twice along with both the Giants and Jaguars, but we just can’t look past the Tennessee defense.