As the NBA All-Star break approaches, the Boston Celtics are evaluating where they stand.

A recent rough patch has resulted in a 15-16 record and a sixth-place standing in the Eastern Conference, but it’s looked much worse than that at times.

Celtics president of basketball operations Danny Ainge has placed some of the blame upon himself for the way he assembled the roster entering this season, although as majority team owner Wyc Grousbeck pointed out Wednesday, Boston’s issues run deeper than anything Ainge or coach Brad Stevens are responsible for.

“You can’t say you’re a contender if you’re below .500 a third of the way into the season, so we’re not,” Grousbeck said in a radio interview on 98.5 The Sports Hub. “I hope the second third is better than the first third, but we have some work to do.”

Grousbeck pointed to inconsistency as a major issue, as this Celtics team routinely shows flashes of its potential before reverting to some immature decisions and breakdowns.

Grousbeck pointed to Boston’s youth as something that shows promise, though many players might not be ready just yet.

Grousbeck will be watching Wednesday night as the Celtics take on the Atlanta Hawks at 7:30 p.m. ET. 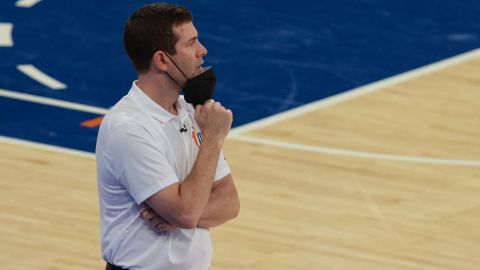