The hockey world knew the Bruins weren’t themselves in giving up a combined 13 goals over their last two games. Still, they needed prove it.

And Boston did just that Sunday afternoon, thoroughly outplaying the New York Rangers in a physical, impressive victory at Madison Square Garden. The Rangers hardly backed down, but the Bruins threw the first punch and carried their high level of play throughout the 4-1 win. Boston out-shot, out-hit and registered more blocked shots than its opponent.

“That was our identity,” he said after the game.

Charlie McAvoy, who scored a goal and played an all-around excellent game (more on that later), sang a similar tune.

“There was urgency to get back to our identity,” he said.

Added McAvoy: “Kinda felt like a must-win in our room.”

To be clear: It wasn’t all about throwing weight around and finishing the game with a fight — although that was pretty cool. The Bruins limited their penalties, were responsible with the puck and got the kind of secondary scoring that too often this season has been missing.

“I think it was all getting back to our game,” Cassidy said. “I didn’t think we were that far off from our game (in last two contests).

” … Tonight I thought, from the first shift on to essentially the last shift, we’re gonna play the same way no matter who rolls over the boards. And that’s what I loved from the game today.”

Obviously, Sunday’s win will mean nothing if the Bruins can’t build upon it and put forth a similar effort Wednesday when they host the Washington Capitals. But this hardly is rocket science for a close group that has enjoyed so much success over the last few years.

“When we play the way we did today … stick together … that’s huge for us,” Charlie Coyle, who scored two goals against the Rangers, said after the game. ” … We’ll get that result more times than not if we play that way.

“That’s Bruins hockey for us. When we play that way, we have more fun … We’re a hard team to play against.”

— Trent Frederic had another impressive game, scoring a goal and displaying the kind of fearless intensity he’s becoming known for.

“He’s starting to annoy people,” Cassidy said. “He’s a big body that can back it up. You’re seeing the edge to his game. If that’s what makes him a better player, we’re all for it.”

Apparently, Frederic wishes it was he who dropped the gloves after the final horn.

“Hopefully I get another shot at 48 (Brendan Lemeiux),” Frederic told reporters, per The Sports Hub’s Ty Anderson.

— In case you missed it, Coyle’s first goal was one of the Bruins’ sweeter tallies this season.

— As we said earlier, McAvoy had a great game:

— Oh, and he’s having a Norris Trophy-caliber season: 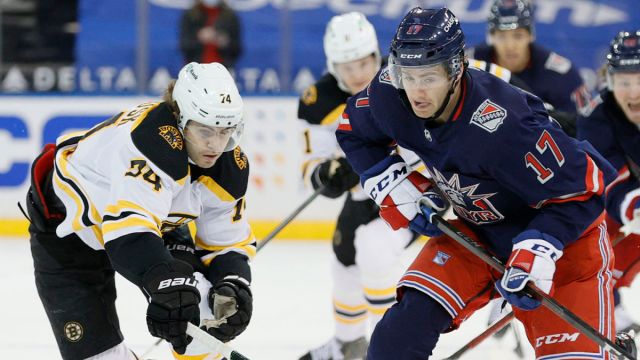 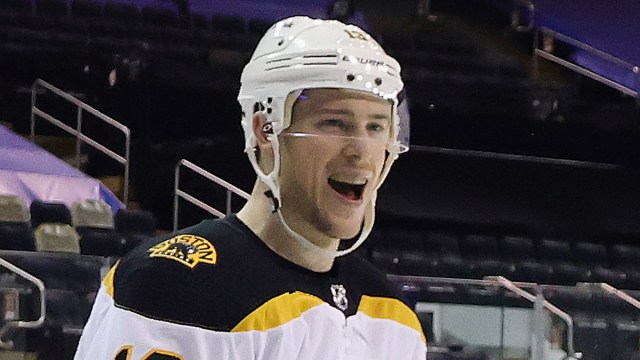