Jayson Tatum put the Boston Celtics on his back Sunday.

The NBA All-Star scored the team’s last eight points, six of which came in the final 43 seconds, to propel the Celtics to a 111-110 victory.

Tatum finished with a team-high 31 points in the Celtics’ second consecutive win, but no basket was bigger than his game-winning reverse lay-up with under five seconds left.

“We had a play drawn up, and if it didnâ€™t work, Brad (Stevens) told me to go post up in that mid-post area and make the play,” Tatum told NBC Sports Boston after the game. “That’s what I tried to do, and we got a big stop.”

What was even more important, as Tatum referenced, was that he followed it up with game-winning defense on consecutive crunch-time possessions. He was the closest defender as Bradley Beal turned the ball over out of bounds with 12 seconds left. And then, after his eventual game-winning bucket, Tatum double-teamed Beal with teammate Semi Ojeleye in the corner. Beal was forced into a difficult 19-footer which missed as the horn sounded.

“It was winning time,” Tatum said. “We told each other we got to dig deep in that timeout — do whatever it takes to figure it out.”

The Celtics were down five points with 47 seconds left before Tatum scored the last six points of the game. He added eight rebounds, three assists and three steals.

“You know, I thought the other night Kemba (Walker) really willed us. I thought tonight Jaysonâ€™s will showed through,” Celtics head coach Brad Stevens told reporters, as seen on NBC Sports Boston’s postgame coverage. “I thought we got a lot of good play from a lot of guys, but it’s been a tough stretch for Jayson, but this matters to him. He wants to win and he made big plays.”

Walker added: “JT just being JT made some unbelievable baskets, got us that win. … He just made some tough lay ups. That’s what great players do.”

Here are some other notes from Celtics-Wizards:

— Stevens was pleased with Sunday’s win, especially with how one specific game ended last week. The Celtics head coach seems to be of the mindset that it helps make up for it.

“I think maybe we got a little bit back from the unlucky stuff in Dallas,” Stevens said, referencing Boston’s buzzer-beating loss to the Mavericks. “… We did a lot of good things to give ourselves a chance to win even though we were down.”

— Kemba Walker scored 20-plus points in a third straight game. It was the first time he had down so this season. He finished with 21 points, eight rebounds and five assists.

He was a key part of the run down the stretch, as well.

“Like I said, I thought we just stay poised. We were pretty locked in at the end. It was just a crazy way to end the game. It was a crazy ending. But like I said, we just stood tough,” Walker told reporters.

— The Celtics may not have been in the position they were in without Daniel Theis.

The Celtics center scored eight straight points midway through the fourth quarter, hitting three foul-line jumpers and converting one strong finish in the paint. It helped Boston stay afloat as Washington would have gone on a run without it.

“He found me in the seam every time,” Theis told reporters, noting Walker’s four consecutive assists. “If we keep moving the ball it’s so hard for teams to guard us. … We got so many guys who can make plays for each other, that’s just what we need.”

— The Celtics will host the Los Angeles Clippers at TD Garden on Tuesday. 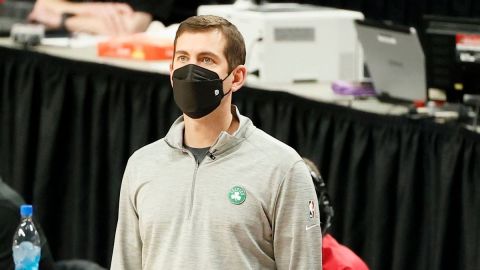