You never know where the next piece of sports content will originate these days.

For over a week, NESN co-workers walked by my cubicle in the second-floor newsroom to tell me who was going to win Super Bowl LV, how many rushing yards Tom Brady will have and what color the Gatorade will be that’s poured on the winning head coach.

You get used to this stuff when you work in the betting space, but it still fascinates me how many people are so passionate with their opinions when it comes to NFL playoff football. As you can imagine, the aforementioned predictions flew from all different directions.

Last Thursday on his way out of the office, senior director of operations Jeff Cummings breezed by, so I hit him with the question du jour.

“I don’t know,” Cummings responded after a six-second pause. “I’m more curious to know what the ratings are in Boston.”

“I think they’ll be just as high as any other Brady Super Bowl if not higher,” I responded. “It’s Tom Brady.”

You could see the surprise even under Cummings’ mask.

After about three minutes of debate, Jeff and I immediately got on the horn with vice president of sales Greg Leach, director of programming Eric Haugen and programming specialist Daniel Lajoie.

Turns out, the highest rated New England Patriots’ title game in the Brady era was a 60.97 back in Super Bowl XLIX (2015) against the Seattle Seahawks. The share was 85 percent of the Boston designated market area (DMA). Eighty-five.

Leach was the only one bold enough to make a prediction. He estimated a 52.00 rating and 77 percent Boston DMA share for Sunday’s game between Brady’s Tampa Bay Buccaneers and the Kansas City Chiefs.

Leach completely nailed the 77 percent share, but the rating was even higher than anybody imagined. The game did a remarkable 57.60 in Boston. It’s the second best Super Bowl rating in the history of the market, topping the rating for most of the games the Patriots played in.

And more people actually watched Brady win his seventh Super Bowl in Boston (57.60) than they did in Tampa (52.30). Sheesh.

The power of Tom Brady still holds serious weight in the hearts of New Englanders. Clearly, Boston sports fans wanted to watch how he fared in his chase for another championship.

We just can’t quit him. 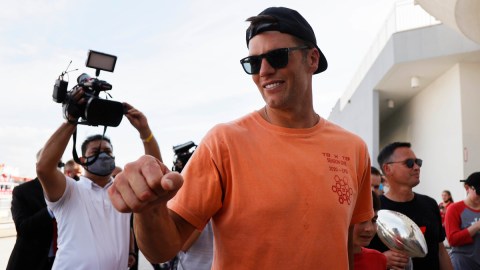