Zdeno Chara made his return to Boston for the first time Wednesday, but his former Bruins teammates think he deserved better.

It was no fault of the Bruins, of course, considering fans still aren’t allowed to attend games at TD Garden due to Boston’s COVID-19 protocols.

Chara got the warmest welcome possible during the Washington Capitals’ 2-1 shootout win over the B’s. Still, Tuukka Rask and Brad Marchand think he deserved more.

“I think the biggest thing is its unfortunate fans can’t be here to be part of it,” Marchand told reporters after the game. “Z’s been such a big part of this organization for such a long period of time, it really didn’t seem like it was a good enough tribute for him. And that’s just because of the situation. Obviously we love Z. He was a great teammate and a phenomenal role model for everyone here. … I’m sure he’ll enjoy the next one when the fans are here.”

Rask added: “It sucks that there weren’t any fans there. … We lived through all those moments together, but it unfortunately wasn’t as emotional as it would have been if fans had been able to be there.”

Head coach Bruce Cassidy also was disappointed Chara wasn’t able to get the proper welcome. But he knows it would have been great had fans been there to witness the occasion.

“I felt a little bad for him that there weren’t 18,000-plus fans here giving him the ovation he deserved, to be honest with you,” Cassidy told reporters. “That would have been a real nice thing for him, but obviously that’s not able to be done right now with the circumstances, so too bad for him. … I certainly thought of the St. Louis final, coming back from a broken jaw, was probably the first thing that went through my head, the ovation he got that night I’m sure it would have been very similar.”

Once fans are back in the building, we can only imagine how loud they’ll be when Chara takes the ice back in Boston. 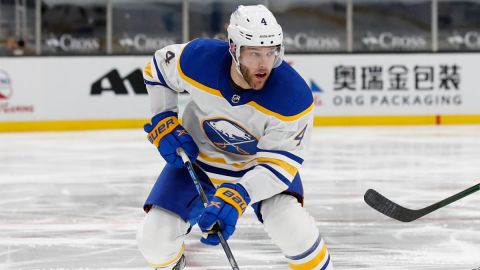