The Boston Celtics have won four straight games, but they had to grind the latest one out on Thursday night.

Despite the Raptors dealing with a decimated roster thanks to the NBA’s COVID-19 health and safety protocols, Toronto came to play against Boston and never really made it easy.

But behind one of Boston’s most balanced offensive performances of the season, with eight players reaching double-digit scoring including four bench players, the Celtics managed a 132-125 win.

Chris Boucher had a game-high 30 points off the bench for the Raptors, while Norman Powell had 25. The Raptors hit 21 3-pointers and Kyle Lowry had an impressive 19 assists.

RAPTORS DON’T LOOK SHORTHANDED
Tatum, having suffered a slump of late, came out hot in the first minutes of the game with seven points, three boards and two assists.

As did Walker and Thompson, who both got work done in the paint early.

They didn’t really look like being shorthanded phased them, and the Raptors got in the bonus with 4:50 left in the first quarter and the game tied at 21-21. Still, Toronto managed as much as a five-point lead in a back-and-fourth final minute thanks to Powell and Aron Baynes.

The Celtics kept them off the line the entire frame, but didn’t take advantage of that or the fact that they were outshooting the Raptors with six opening turnovers.

BUCKETS FROM THE BENCH
The bench, between Grant Williams, Jeff Teague, Pritchard and Robert Williams, scored the first 16 points to keep things close. They finished with with the unit responsible for 22 of Boston’s 35 second-quarter points.

Robert Williams and Tatum brought a lot of energy around the rim for Boston, but despite shooting 59% in the first half, Boston trailed 70-66 at the half.

TAKING THE LEAD
Thompson got Boston off to a good start out of the break, but Brown got himself going driving to the hoop and at the line, and both he and Tatum helped Boston take a lead in the third.

And to close out the quarter, Teague and Grant Williams both made great contributions to extend the advantage to as many as 12 points.

C’S CLOSE IT OUT
Eight players reached double-digit scoring by the fourth quarter, and Boston seemed to move the ball as well as ever throughout the fourth.

But all of a sudden, it was a four-point ball game after Boucher dropped a 3, and the Raptors cut it down to three. Walker took a clutch charge that lead to a Tatum jumper and some breathing room.

Biggest play of the night, perhaps, was a floater from Teague with just over a minute left in the game that put Boston up eight-points. And Tatum followed that up with a dagger from deep.

UP NEXT
Finally, the Celtics get to put their feet up until Thursday, March 11 when they travel to Brooklyn to face the Nets.

Except for Tatum and Jaylen, who will be playing in the All-Star Game on Sunday, March 7. 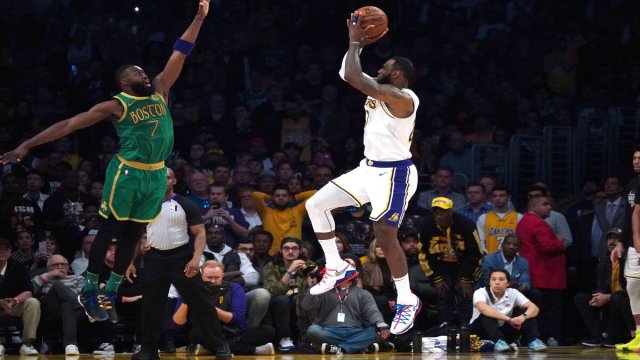 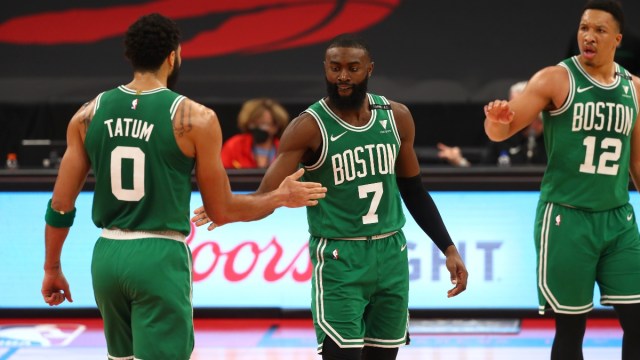