The Boston Red Sox will contend again for a World Series. They have too many resources and a fanbase that cares far too much to accept sustained losing.

But just how close Boston is to contending again is rooted deeply in how much you believe in the current core.

One of the biggest goals Chaim Bloom — and by extension, the organization — has is to create sustainability. It was great when the Red Sox bounced back from the nightmare 2012 campaign to win the World Series in 2013. What wasn’t great, of course, was the two last-place finishes that followed in 2014 and 2015.

How Bloom goes about building a sustainable organization continues to play out in front of us. Versatility has been a priority from the beginning, in order to maximize assets both on the field and financially. Restocking the farm system might be the most important aspect of the whole thing, as a team like the Los Angeles Dodgers has proved the recipe for building perennial championship contenders is pairing a deep farm system with even deeper pockets.

But at the end of the day, a lot of it comes back to the big league core. How good are you at the highest level, and how long can you keep that group together?

For the purpose of this argument, let’s look at the next five years, and let’s define the big league core — players expected to be on the major league roster in 2021 — as the following players:

Contract uncertainty kept J.D. Martinez off that list, and he’s also 33 years old. But we’d certainly listen to an argument for his inclusion.

If we’re projecting five years ahead, let’s also include the following prospects for the “core” we’re building:

Of course, you could also add to that list, but it’s impossible to say how things change with prospects not only in their development but their future with the club. 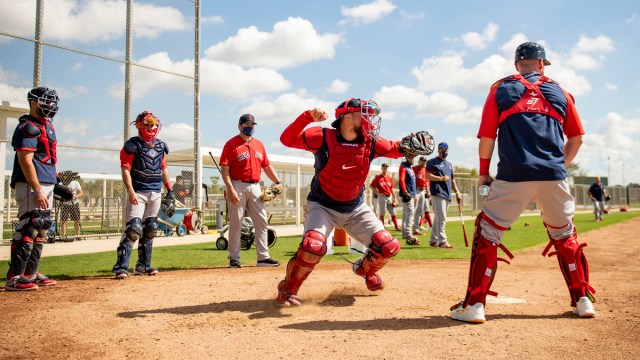 OK, so is that nine- to 11-player group the core of the next great Red Sox team?

At their absolute peaks, the answer is pretty clear: Yes. A lot of that is based on Rodriguez and Sale anchoring the rotation for the next four or five years, although that also includes a new contract for Rodriguez and clean health for Sale, who is recovering from Tommy John surgery. It also assumes Devers is locked up long term — which sounds like it’s on the table — and Bogaerts doesn’t opt out. But we’re only two years removed from them being five- and six-win players, respectively. If they stay for the long haul, it’s arguably the top left side of an infield in all of baseball. Vazquez, if extended beyond next season, would remain a heart-and-soul player with three-win potential.

Verdugo, meanwhile, seems like the sort of guy who is committed to helping turn this thing around. He loves the fit and apparently loves playing for the Red Sox. Dalbec has legitimate 70-grade power. Houck already has shown flashes at the big league level, while Downs and Durran have turned heads in the last year.

If all breaks right, that’s a very good group of players, but is it enough to contend for a World Series? It’s certainly possible, and it wouldn’t be surprising to see a team with that collection of players contend for titles.

But there’s obviously still work to be done, which makes you think the core might not look like that in two or three years. The Red Sox, quite clearly, are still short on starting pitching. They’re at least a front-line starter or two away from being on the level of a team like the Dodgers, who have pitching coming out their ears. It doesn’t feel like a lot of that pitching depth is coming from within the organization, meaning Bloom might need to get creative. That theoretically could be done by opening up the checkbook, but the more likely scenario seems like some sort of blockbuster trade (or trades) that include the aforementioned core.

The Red Sox probably are closer to being back where they want to be than a lot of folks would realize or acknowledge. But there’s still a good deal of work to be done. So while it wouldn’t be surprising to see a good chunk of the players mentioned above be part of the next great Red Sox teams, it’s likely they’ll be part of an even bigger core with players not currently in the organization that help Boston get back — and stay back — to where it wants to be.