Both Dak Prescott and the Dallas Cowboys said for quite some time how they wanted to remain together.

And though it may not have always felt that way, the Cowboys undoubtedly making some fans nervous with their long-term offers to Prescott, the two sides came to an agreement Monday.

Prescott agreed to a four-year contract worth $160 million with $126 million guaranteed, according to NFL Network’s Ian Rapoport and ESPN’s Adam Schefter. The deal, which comes one day before the deadline to use the franchise tag, includes a $66 million signing bonus and $75 million in the first year, according to multiple reports.

Prescott undoubtedly will be viewed as the big winner, and for good reason.

The 27-year-old Prescott received the four-year agreement he wanted while the Cowboys wanted five. Schefter noted the first three seasons would be an average of $42 million per year meaning Prescott eclipsed the $40 million per year average he was seeking, too.

It also means Prescott, who enters his age-28 season, gets to return to free agency at what will be considered the tail-end of his prime. And then there’s the fact that Prescott received both the no-tag and no-trade clause. (Ask Watson how much he appreciates having that no-trade clause as things spiral in nearby Houston.)

It goes to show how Prescott, who is 19-6 against the NFC East with one postseason win, had all the leverage and used it.

With that said, though, let’s not act like the Cowboys got absolutely crushed here. Whether you have Prescott in your top five or top 10 signal-callers, Dallas now has him under contract for the prime of his professional career.

Prescott, whether you feel like he deserves it or not, would have got a similar deal on the open market. It may have been even larger. Dallas now gets to make the team around Prescott better as they can move his cap hit around.

The reality is the Cowboys struck gold by finding a rookie quarterback in the fourth round and having him immediately slot in as the team’s starter — and a good one — during his first season. Dallas reaped the benefits of not having to pay its franchise QB franchise money ($1.6 million for first three seasons) for a long time. That ran out.

If the Cowboys jumped on an extension before Jared Goff was granted $134 million and Carson Wentz was given $128 million, they probably wouldn’t have had to dish out $126 million guaranteed. But they didn’t, so they did.

Side note: Those two quarterbacks — Goff and Wentz — were selected No. 1 and No. 2 overall in the same 2016 NFL Draft as Prescott. Now, neither is with their original team. Prescott now is the only quarterback of the 22 (!) selected during the 2015 or 2016 NFL Drafts that remains with his original team, per ESPN’s Field Yates.

So, it could be worse, right?

The Cowboys also made it as difficult as possible on themselves these last few seasons. Dallas could’ve signed Prescott to a long-term contract last season, but didn’t. Instead, the franchise tag was used and that’s when their leverage really got away.

Prescott’s dislocated ankle and compound fracture during Week 5 proved just how much the Cowboys need him. Dallas undoubtedly has gapping holes up on the roster — cornerback, linebacker and defensive tackle just to name a few — but its franchise quarterback at least kept them competitive.

Now, being nervous about throwing $126 million at a quarterback who is working back from what could be a career-altering injury is a very fair concern. But Cowboys’ Stephen Jones said three days after the injury it wouldn’t impact the organization’s commitment to Prescott, and they proved it. They’re confident in his recovery.

Is the money a lot? Sure, but that’s the NFL.

Just wait until the next batch of quarterbacks — Buffalo Bills’ Josh Allen or Baltimore Ravens’ Lamar Jackson — get paid. We’ll all be saying the same thing then. 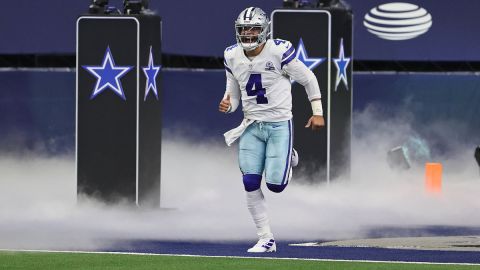 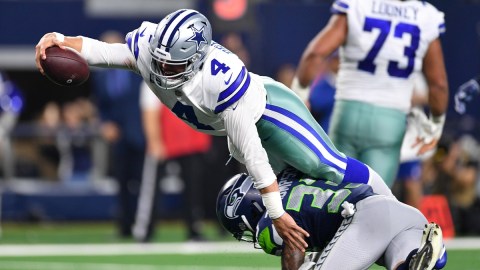