Jeremy Swayman has given Boston Bruins fans a lot to be optimistic about during his four games between the pipes this season.

The Bruins goalie is 3-1-0 after helping lead his team to a 3-2 shootout win Tuesday night against the Buffalo Sabres. Swayman made 21 saves, including two massive ones in the shootout to seal the W.

The 22-year-old has shown tremendous poise during his time in Boston. And he continued that trend with his first-ever shootout between the NHL and AHL.

“I’ve heard he’s real good at them, and obviously he was,” head coach Bruce Cassidy said after the game. “He stood his ground, we’ve seen him on breakaways — there was a game earlier this year he made a save … on Laughton on a breakaway. … We’ve heard he’s real rock solid on those. As a coach you don’t wanna become that guy, because it was his first one, that coaches in overtime to get to the shootout when he’s in. But I know there’s people that do that when their goalie is that good. So it was nice to see him be rock solid, us get some goals in the shootout. I thought we played well in the overtime in terms of attacking. Got a break with the high-stick, obviously. But good for Sway. … The way the game’s played now, teams get breakaways, and he’s real good in that area, and another good part of his game tonight. … I thought he played well.”

As for Swayman? Well, he loves the shootout.

“I love shootouts,” he said. “I think it’s one of the best parts of the game if we can get to it. And obviously today (I) was able to try it out. And it was pretty cool to get the win with the home crowd, that was a pretty special moment.”

Here are some other notes from Tuesday’s Bruins-Sabres game:

— Taylor Hall, Curtis Lazar and Mike Reilly all made their debut for the Bruins after being traded to Boston over the weekend. Cassidy liked what he saw, and is open to keeping the trio in the same positions for Thursday’s game against the New York Islanders.

“He certainly creates some space,” Cassidy said of Hall. “I thought he did a good job off the rush.”

On Reilly: “Gets shot through traffic.”

On Lazar: “Little more of an O-zone possession line.”

— Swayman was playing with a heavy heart as his college hockey coach, Dennis “Red” Gendron, died last week at the age of 63. Swayman spoke highly of the University of Maine coach April 9, and was quite emotional after Tuesday’s win.

“We all know how impactful Red was to the hockey community, especially my life,” Swayman said. “I loved Red so much. And the things he taught me I’ll have for the rest of my life. My heart reaches out to (his wife) Jan, (and daughters) Katie and Allison. It’s a beautiful family that I consider my own. Again, I’m just so grateful for the experiences I had with him. He’s definitely gonna be a role model for the rest of my life. … I wasn’t alone out there. It was pretty emotional at the end.”

— Both Nick Ritchie and Kevan Miller dropped the gloves for the Bruins. Ritchie really has been coming into his own for the Bruins since being acquired last season. Miller, meanwhile, hasn’t shown up on the stat sheet the way Ritchie has, but has been praised time and time again for what the defenseman has meant to the team.

Tuesday was no different.

“Kevan’s an important guy for us,” Cassidy said.

— David Krejci and Craig Smith accounted for the regulation goals for the Bruins, while Charlie Coyle and Jake DeBrusk found twine in the shootout.

Smith has 15 points in his last 13 games, and clearly is enjoying his time with the Black and Gold.

“Playing for the Boston Bruins is a pretty cool thing,” he said.

— The Bruins are back in action Thursday against a New York Islanders team they have yet to beat this season. 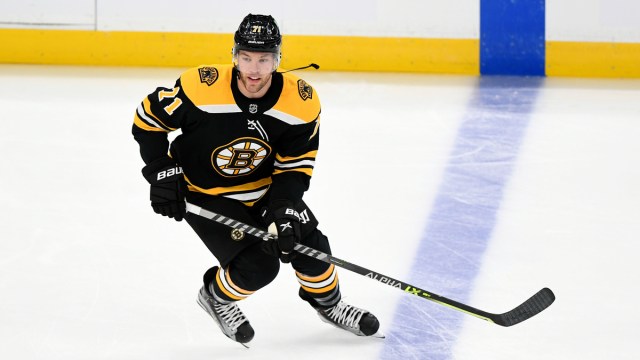 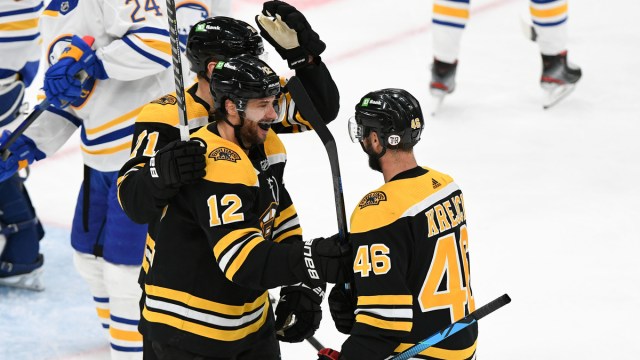