Bruins Notes: Tuukka Rask Reacts To Highlight-Reel Save After Shutout Skip to content

Tuukka Rask did his best Dan Vladar impression Tuesday against the Buffalo Sabres… wait, do we have that right?

The veteran Rask, about a month after the rookie’s incredible stick save during his NHL debut, made a highlight-reel stop of his own in the first period. It was far and away his most noteworthy save of the night, a night in which he stopped all 32 shots he faced to lift the Bruins to a 2-0 victory at KeyBank Center in Buffalo.

Rask, after making the save on Arttu Ruotsalainen’s initial bid from the right side, dove right to left and reached out his glove to block a rebound from Buffalo forward Dylan Cozens, who practically was staring down an empty net.

“Well, those are just half skill half luck, I guess,” Rask said on a video conference with reporters. “You’re kind of in desperation mode at that point when you can’t push over to that side. So you just throw anything at the puck you can and hopefully it hits, and today it did.”

It marked Rask’s third straight victory since returning from injury and was his first shutout of the season (not including his one-period showing March 25).

Rask added after the game that he was feeling good and hopefully will be able to play in “many, many more months ahead.”

Rask, as head coach Bruce Cassidy noted, was Boston’s best player on the night. He also helped the Bruins penalty kill go 6-for-6 on the contest including four third-period kills.

“We got some huge saves from Tuukka obviously tonight,” Cassidy said on a postgame video conference. “The second-effort saves, tracked the puck well. There were some point shots there that he was able to fight his way through and find them. I think he was our best player, that goes without saying. I think we put him in some spots there in the third, we could have been a lot better in front of him and made his life a lot easier.

“So good for him,” Cassidy added. “We expect him to shut the door when need be, we just, like I said, we don’t want to put it all on him in those situations but tonight a little more than we wanted, so just have to be a little better at that area the next game.”

Here are some other notes from Bruins-Sabres on Tuesday.

— Connor Clifton gave the Bruins a 2-0 lead early in the second period after an energetic shift from the fourth line of Sean Kuraly, Curtis Lazar and Chris Wagner. Clifton, who had not scored in 513 days, gave credit to that crew for their puck possession in the offensive zone prior to leading up to his tally.

“It felt good. It’s nice to contribute,” Clifton said on a postgame conference call. “But it was a great play by (Kuraly), Lazar and (Wagner). That line had been going to work in the O-zone all night. And I got a little fortunate bounce there, great screen in front by Wags, and it trickled in. So, that one felt good.”

— Later on in the game, Clifton crashed into the boards prompting a Buffalo tripping penalty, and while his head-first landing didn’t look good, the young defenseman said he was fine.

“Yeah, that’s just a tough spot. It’s an ill-timed fall,” Clifton said. “I guess it was pretty worrisome, the initial reaction, but I ended up being fine. So it was good. All good.”

— Brad Marchand scored what proved to be the eventual game-winning goal just 8:06 into the game as he flipped home a backhand. Marchand now has 55 points this season on 24 goals and 31 assists.

— Bruins blue liner Matt Grzelcyk made his return from injury Tuesday and played 21:06. He registered two shots as Boston out-shot Buffalo 41-32 in the contest.

— The 26-12-6 Bruins will return to the ice Thursday against the Sabres. 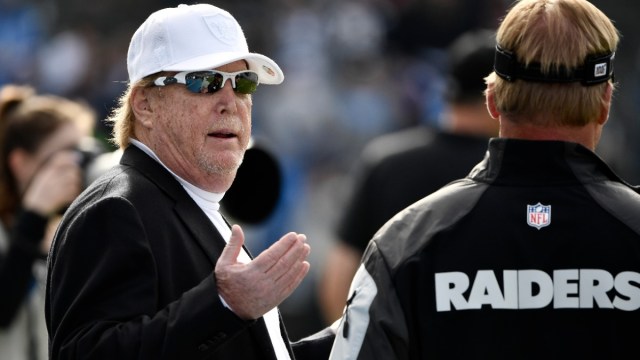 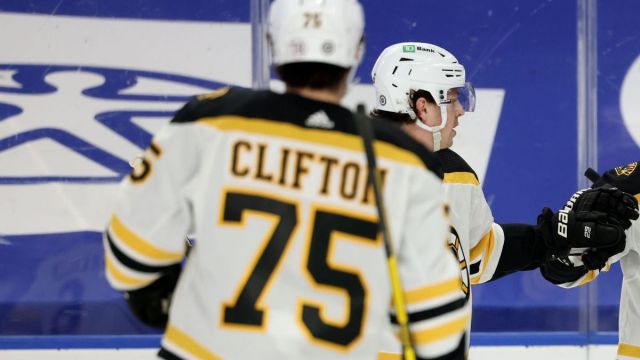