Things looked ugly for the Boston Celtics, but a second-half surge helped them beat the Minnesota Timberwolves at TD Garden in overtime.

The 12 first-half turnovers certainly hurt Boston, but Jayson Tatum’s 53 points was a huge part in helping lead the Celtics to victory.

The Timberwolves controlled a majority of the game, but the Celtics made it interesting in the third after trailing by 17 points to the team who owns the NBA’s worst record.

The Celtics arrived at the end of the third and really kicked up the heat in the fourth, only to let the Timberwolves come back and tie it to force overtime before earning the 145-136 win.

LOW-ENERGY CELTICS
The Celtics started with a strong opening sequence with a Brown dunk, Robert Williams block and a Brown drive to the basket.

That’s about as energetic as they’d look, though, especially on the defensive side.

The five turnovers committed by the Celtics certainly didn’t help their cause, either.

Robert Williams missed back-to-back dunks and had a foul in the opening minutes, which has become a trend for him of late.

The Celtics went into the second down 39-25. The 39 points were a season-high in the opening quarter for the Timberwolves.

MAKING WORST TEAM IN NBA LOOK GOOD
Tatum came out hot, but Minnesota stayed hotter and led 55-43 with 5:40 to go in the half.

Turnovers continued to be an issue for the Celtics, who just seemed to be playing with little to no energy on both ends of the court. The Timberwolves continued to build their lead as things only got uglier for the home team.

There also was this posterization of Tristan Thompson by Josh Okogie.

The painful, ugly first half finally came to an end to the tune of the Celtics losing 66-57.

Tatum, the only real bright spot through two quarters, led all scorers with 18 points.

CELTICS COMING BACK
It didn’t look much better for the Celtics to begin the third as they just couldn’t figure out how to string together any stops.

The Timberwolves quickly went back up by double digits, but Brown made it an eight-point game with 5:20 left in the third.

The Celtics seemed to build up some momentum with Tatum really helping the C’s get back in it, and making it a two-point with game with this 35th point of the night with just over a minute left in the quarter.

Minnesota brought it back to a five-point game entering the fourth.

Tatum’s 35 points were good to continue to pace all shooters.

CELTICS FINALLY SHOW UP, BUT LET MINNESOTA BACK IN
Walker tied the game at 97-97 and the Celtics took a slim 101-100 lead.

And all of a sudden, the Celtics showed up.

Grant Williams made a nice play to keep the ball in bounds, nearly taking out the front row of fans in the process. He stayed to check on them for a second, went down the court and dished it to Payton Pritchard for the 3-pointer.

The Celtics couldn’t seem to miss, especially Tatum who sunk his career-high 44th point with a triple to extend the lead to 118-109 with just over three minutes left.

The Timberwolves made it a one-point game in the final minute, and things got sloppy again on the Celtics’ end. But Tatum put them back up by three with 17.3 seconds left in the game.

Minnesota just wouldn’t go away, though, as D’Angelo Russell tied it at 124-124 with a shot from deep with eight seconds to play.

And this game needed overtime to decide the winner after Tatum missed what would have been game-winner.

CELTICS WIN IT
Naturally, Tatum scored overtime’s first points to give him 50 on the night.

Towns took a wide-open shot before Brown put the Celtics back ahead 129-127.

Walker stepped up big time, though, and sunk a 3-pointer to make it a five-point game with just over two minutes left in OT.

Boston began to pull away in the final minute with an eight-point lead, and finally put the Timberwolves away in overtime.

PLAY OF THE GAME
So good, we had to show it twice.

UP NEXT
The Celtics hit the road for a three-game trip beginning Sunday against the Denver Nuggets. Tip-off from Ball Arena is set for 3 p.m. ET. 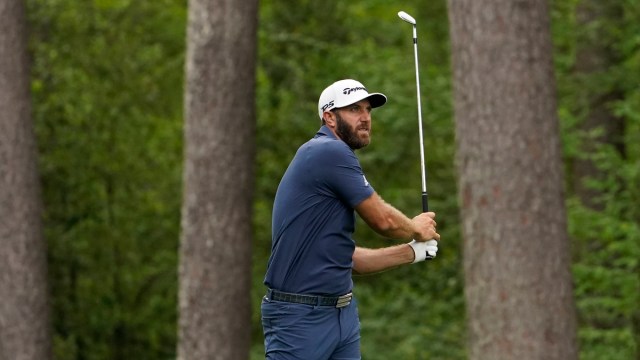 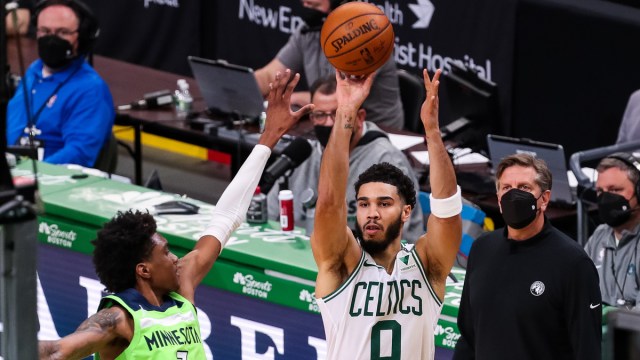