It’s the biggest question surrounding the New England Patriots as the 2021 NFL Draft approaches: Will they trade up for a quarterback?

And if they do, with whom?

With the draft now just one week away, we’ll take a closer look at each of the 11 teams set to pick ahead of New England — which currently owns the 15th overall selection — but outside of the top three, as the Jacksonville Jaguars (No. 1), New York Jets (No. 2) and San Francisco 49ers (No. 3) all are expected to take QBs and are unlikely to trade down.

A few of those 11 clubs aren’t likely to entertain a Patriots trade-up proposal, but many have either expressed interest in moving down the board or are at least open to doing so, according to various pre-draft reports.

Atlanta Falcons, No. 4 overall
The Falcons have three choices at No. 4. They can: A) select one of the two remaining top-tier quarterbacks, B) draft the top non-QB prospect, likely Florida tight end Kyle Pitts, or C) trade the pick for a healthy return. The decision they make will determine how the rest of the draft plays out.

With big money tied to Matt Ryan in 2021 and 2022, waiting to grab the 35-year-old QB’s eventual successor would make more financial sense. The Falcons are “open” to trading down and have fielded calls from multiple interested teams, ESPN’s Adam Schefter reported earlier this month.

The price to move from No. 15 to No. 4 likely would be especially steep this year given teams’ interest in the five elite QB prospects. The 49ers sent three first-round picks (including No. 12 overall this year) plus a future third to the Miami Dolphins last month to vault up to No. 3.

Cincinnati Bengals, No. 5 overall
The Bengals don’t sound interested in trading back, which makes sense. At No. 5, they should have their choice of Oregon tackle Penei Sewell or LSU wide receiver — and former Joe Burrow teammate — Ja’Marr Chase.

“We feel we’re in a good spot,” director of player personnel Duke Tobin recently told Bengals.com. “We’re going to be careful not to be overly greedy and get out of a spot where we maybe lose a premier player and we feel like can get one of the premier players in this draft.”

Miami Dolphins, No. 6 overall
The Dolphins already have dealt their top 2021 pick twice — moving from No. 3 to 12 and then back up to 6 — and they’re considering trading down again, according to a report this week from NFL Media’s Ian Rapoport.

We don’t view Miami as a realistic trade partner for New England, though. It’s difficult to imagine Chris Grier and Brian Flores handing a potential franchise quarterback to a division rival.

Detroit Lions, No. 7 overall
Citing a “senior executive,” The Athletic’s Ben Standig reported the Lions “are looking for another deal and trying to move down from No. 7.” Detroit is in a rebuilding phase under new head coach Dan Campbell and general manager Brad Holmes, and QB isn’t high on its list of needs after swapping Matthew Stafford for Jared Goff.

There’s no longer a New England connection there with Matt Patricia and Bob Quinn gone, but the Patriots could look to jump to this spot if their preferred top QB slides. Trading up to No. 7 — which, importantly, would put them ahead of QB-needy Denver — naturally would be more affordable than catapulting all the way to No. 4.

Carolina Panthers, No. 8 overall
The Panthers got their quarterback when they traded for Sam Darnold, and though they still could select a signal-caller in this spot, that’s now far less likely. ESPN’s Adam Schefter reported Tuesday the Panthers have had discussions with teams about trade-down possibilities.

A source confirmed to NESN’s Doug Kyed that Carolina is open to moving back.

Denver Broncos, No. 9 overall
Of the teams picking between fourth and 10th, the Broncos are the most likely to select a quarterback, making them an unlikely trade partner. They’ve called Atlanta about potentially trading up at No. 4 and are high on both Ohio State’s Justin Fields and North Dakota State’s Trey Lance, according to a report from Woody Paige of the Denver Gazette.

With Trevor Lawrence and Zach Wilson widely expected to go 1-2 next Thursday night, Fields, Lance and Alabama’s Mac Jones are the three potential top-flight QB options for teams like the Broncos and Patriots, depending on whom San Francisco ultimately prefers with the third pick.

Dallas Cowboys, No. 10 overall
Dallas at No. 10 would be a natural landing spot for Alabama cornerback Patrick Surtain II, but Cowboys COO Stephen Jones said the team also has received calls about potentially trading back. The Cowboys don’t need a QB after re-signing Dak Prescott. ESPN’s Mel Kiper Jr. has the Patriots acquiring this pick and selecting Fields in his latest mock draft. In reality, though, there’s a good chance Fields, Lance and Jones all could be gone by this point.

New York Giants, No. 11 overall
Another team that isn’t in the quarterback market, the Giants are “internally considering” trading down, per a report Tuesday from Rapoport.

Dave Gettleman’s long-standing aversion to moving back in the first round could be a sticking point, but there is a strong New England tie here: Giants head coach Joe Judge spent eight years on Bill Belichick’s staff as a Patriots assistant. ESPN’s Todd McShay predicted a Pats-Giants swap in his latest mock, with New England moving to No. 11 to grab Fields.

Philadelphia Eagles, No. 12 overall
Philly has “explored another move down,” according to a report Monday from The MMQB’s Albert Breer. The Eagles already dropped from sixth to 12th, picking up a future first-round pick from the Dolphins in the process. They’re also reportedly considering a trade-up that would get them back into the top 10. The Eagles probably won’t take a QB, but with only Jalen Hurts and Joe Flacco on their current roster, that’s not a guarantee.

Los Angeles Chargers, No. 13 overall
There haven’t been any pre-draft reports about the Chargers potentially trading down. Most expect them to target a tackle in this spot to protect 2020 Offensive Rookie of the Year Justin Herbert. The Patriots and Chargers executed a first-round draft trade last year, with New England swapping the 23rd overall pick (used on linebacker Kenneth Murray) for one second-rounder (No. 37, safety Kyle Dugger) and one third (No. 71, flipped to Baltimore).

Minnesota Vikings, No. 14 overall
No rumblings about Minnesota looking to move down, either. But it wouldn’t cost New England much to climb up a slot or two if a quarterback slides into that range. Belichick discussed this possibility last week during his pre-draft video conference.

“I would say normally,” the Patriots coach said, “something will happen and there could very well be a player there that either you don’t expect to be there or maybe he is a couple spots, maybe at 12, 13 he’s still on the board and you really thought he’d be gone in the first six, seven picks. And then the question comes, do you try to move up and get that player that’s fallen a little bit?” 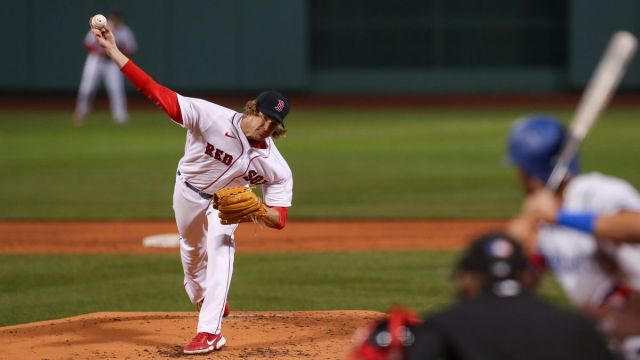 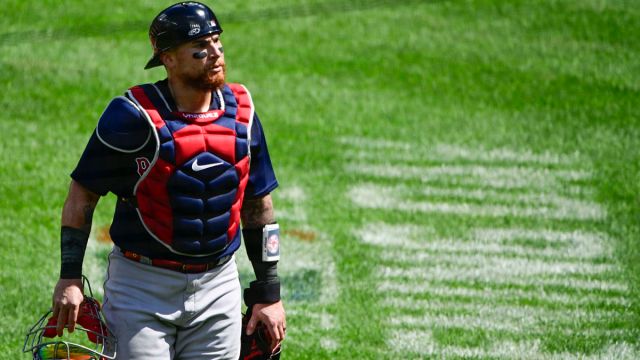