The NHL trade deadline is officially less than a week away, and teams across the league have some real difficult decisions to make.

The new-for-this-year playoff format means you’re battling the same teams for four playoff spots. So, if you’re a team that’s just five or six points out of a playoff spot with three games left against the team you’re chasing, do you want to go for it or sell off pieces at the April 12 deadline?

A lack of sellers obviously will affect the market, but that doesn’t mean there won’t be any action. Here are the best players who could be moved before Monday’s deadline.

Honorable mention: Ryan Ellis/Mattias Ekholm, defensemen, Nashville Predators
It wasn’t long ago Ekholm was the subject of myriad trade rumors. The big defenseman looked like one of the top prizes at the deadline. Ellis’ name also started to come up in trade rumors, as the Predators looked ready to fall apart. Then, Nashville got hot, and other defense-needy contenders can probably kiss hopes of acquiring either goodbye. It turns out having two really good defensemen can make your team pretty good. Who knew?

6. The goalies
Instead of diving too deep into the goalie market, let’s just quickly hit on the potential options. Blue Jackets netminder Elvis Merzlikins is probably the best available option, assuming CBJ is selling. It doesn’t make much sense for a bad team to ride two goalies down the stretch, especially if you know what you have in both, so you might as well try to maximize the asset (in this case, Merzlikins) and ride with Joonas Korpisalo moving forward.

Another option for those seeking goaltending? Detroit’s Jonathan Bernier, who might be better suited for teams looking to add a veteran backup, if the price isn’t too high. One last name to consider: Kings goalie Jonathan Quick. The UMass product might be one of the Kings’ top trade chips, and dealing Quick would add to LA’s stockpile of young prospects as its rebuild continues. Getting out from under at least some of that contract could be motivation to move him, too.

5. Mikael Granlund, C, Nashville Predators
Just because Nashville has come alive doesn’t mean it won’t make some sort of move with an eye on the future. Granlund might not be the best trade chip David Poille owns, but the veteran center should present a solid return, especially if this shapes up to be a seller’s market. The 29-year-old has eight goals this season and would add depth down the middle for most contenders. He also has playoff experience with some big goals under his belt. 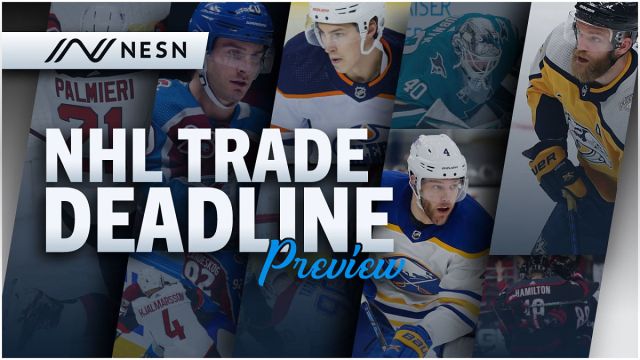 4. Rickard Rakell, RW, Anaheim Ducks
The ability obviously is there. Rakell averaged 29 goals per season over a three-year stretch earlier in his career. However, the production has seen a fairly sharp decline over the last couple of seasons. He’s also dealing with an upper-body injury at the moment that has kept him out of the lineup. If he’s healthy, however, it’s easy to see why a team with good center depth might be willing to take a chance. Put him with the right playmaking center, and it’s possible he gets hot again. And if teams really like the player, he’s also signed through next season.

3. David Savard, D, Columbus Blue Jackets
The 6-foot-2, 230-pound blue-liner has been asked to shoulder a heavy load this season in Columbus. He has started a career-high 62.2 percent of his even-strength shifts in the defensive zone while averaging just under 20 minutes per night. The numbers aren’t great, but that’s to be expected when you’re playing those kinds of minutes for a bad team. The aforementioned Nashville surge probably leaves a much higher demand for Savard than previously thought. He’s a solid option for a team looking to shore up the back end.

2. Kyle Palmieri, RW, New Jersey Devils
Just like seemingly every forward on this list, Palmieri is having a down season — at least against everyone not named the Boston Bruins. He has just eight goals in 34 games, but his shooting percentage — 9.5 percent — sure stands out when looking at his stats. Maybe last season’s 16.2 percent rate wasn’t sustainable, but this year is a far cry from the 13 percent career clip he had entering the season. He seems like the perfect addition for a team looking for an offensive-minded second-line winger … perhaps those Bruins he’s tortured all season?

1. Taylor Hall, LW, Buffalo Sabres
Some of us were silly enough to believe Buffalo signing Hall to a one-year deal would help the rebuilding process for each side. In fact, it appears to have done the opposite. The Sabres are historically bad, and Hall has just two goals and 17 assists in 37 games. All of that being said, he is a former No. 1 pick who has a Hart Trophy to his name. That MVP season was just three years ago. The talent is still in there … right? The $8 million cap hit is steep, but it might be a worthwhile gamble to give Hall yet another change of scenery.