Potential Patriots: Wide Receiver For Pats In Every Round Of NFL Draft Skip to content

Julian Edelman’s retirement this week was not entirely surprising but it does impact the New England Patriots’ need for another wide receiver in the 2021 NFL Draft, if only slightly.

The Patriots now head into the spring with just eight players on their 90-man roster at the position: Nelson Agholor, Jakobi Meyers, Kendrick Bourne, N’Keal Harry, Gunner Olszewski, Kristian Wilkerson, Isaiah Zuber and Devin Smith. Harry, a 2019 first-round pick, has been mentioned in trade rumors this offseason. New England would not have been able to count on Edelman to play 17 games and any potential playoff contests in 2021, but he would have added another layer of depth.

The Patriots shouldn’t be looking at their wide receiver need in a vacuum. They did add tight ends Hunter Henry and Jonnu Smith and re-signed pass-catching running back James White this offseason, but the wide receiver group is still one of the weakest units in the NFL. The pass-catchers as a whole rank higher, but New England still could use one more premier target in its offense.

After passing on the position in one of the most loaded receiver classes in NFL draft history last spring, the Patriots now find themselves staring down another talented crop of wideouts.

There are 13 wide receivers viewed as first- or second-round prospects in this year’s draft. The Patriots pick 15th overall in the first round and own the 46th overall pick (second round), the 96th selection (third round) as well as three fourth-round picks, a fifth-round selection, two sixth-round choices and a seventh-rounder. New England would be unwise to come out of a second straight draft without a wide receiver.

So, what do the Patriots typically look for when drafting the position?

Here is every wide receiver the Patriots have drafted since Bill Belichick took over as head coach in 2000.

There are some distinct commonalities between bigger and smaller wide receivers drafted by the Patriots.

Shorter wide receivers rank better in speed and agility drills but not as highly in the vertical leap.

But, in general, when looking at wide receivers who would interest the Patriots, athleticism matters.

Finally, we weighted all of the standardized measurements for an overall “Fit” metric.

Here are the top 20 wide receivers for the Patriots based on our Fit metric:

Now here are the best wide receiver fits for the Patriots in each round of the 2021 NFL Draft:

First Round: Ja’Marr Chase, LSU
Aim high, right? It seems unlikely that Chase, who opted out for the 2020 season after catching 84 passes for 1,780 yards with 20 touchdowns as a sophomore in 2019, will be available at No. 15 overall. The same would have been said about CeeDee Lamb dropping to the Dallas Cowboys at No. 17 overall in the 2020 draft, however.

Chase would likely need to be the third wide receiver off the board after DeVonta Smith and Jaylen Waddle, which is possible. It also helps New England’s odds of landing Chase (or Smith or Waddle) that it’s a deep class of wideouts. Another team might decide that the difference between one of the top wide receivers in the first round and one that can be taken in the second round is less than the difference between an offensive tackle, quarterback or tight end in the first round vs. the second round.

Chase is a nearly ideal fit based on pro day measurements, and he’s an incredible player who would fill a major need as the Patriots’ X receiver.

Second Round: Elijah Moore, Ole Miss
Moore is an undersized slot option, and the Patriots don’t really have that type of player on their roster right now. Agholor, Bourne and Meyers all can play the slot, but they can’t get open in a phone booth the way players like Edelman, Wes Welker and Danny Amendola could.

There are plenty of second-round receivers who would fit New England. Florida’s Kadarius Toney, Minnesota’s Rashod Bateman, Purdue’s Rondale Moore, Western Michigan’s Dwayne Eskridge and UNC’s Dyami Brown could all be taken somewhere from the late first round into the early third round.

The second round seems like the sweet spot to grab a wide receiver this year.

Third Round: Nico Collins, Michigan
Collins has actually been compared to Harry. Perhaps the Patriots could get a better version of their 2019 first-round pick in the third round of the 2021 NFL Draft. Collins, like Chase, opted out for the 2020 season.

Fourth Round: Simi Fehoko, Stanford
Fehoko is a massive presence at 6-foot-4 and 222 pounds. He managed 37 catches for 574 yards with three touchdowns in just six games with Stanford in 2020. He’ll be 24 years old in November but is a serious deep threat.

Sixth Round: Jacob Harris, Central Florida
At 6-foot-5, 219 pounds, Harris is listed as a tight end on some draft rankings. He lacked production at UCF but is one of the best pure athletes in the draft. His 6.51-second 3-cone drill at nearly 220 pounds is freaky. He did catch 30 passes for 539 yards with eight touchdowns in 2020. So, it’s not as if he didn’t play. He is already 24 years old, however.

Seventh Round: Connor Wedington, Stanford
He’s worthy of a late-round flier based on his size and athleticism. He also returned kicks at Stanford. 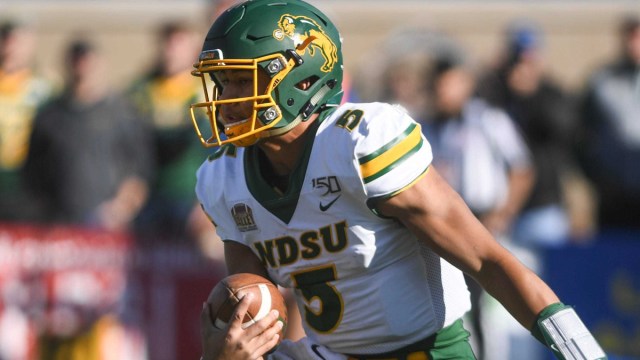 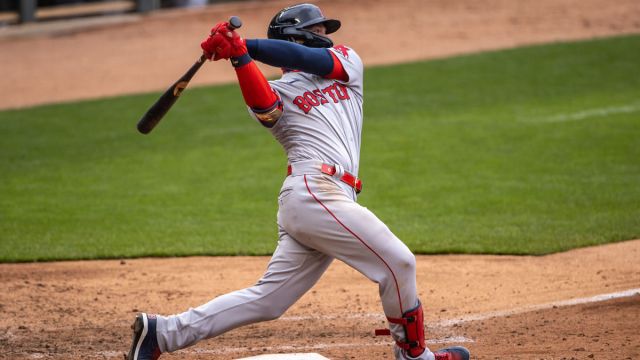