The Boston Bruins were getting healthier, but it appears that pattern is pausing.

When the Bruins face the New York Rangers on Thursday, they’ll be without Charlie Coyle.

The veteran forward had been hitting his stride on the third line right wing opposite Nick Ritchie with Sean Kuraly between them. But after leaving Tuesday’s game with an upper-body injury, Coyle will be out Thursday, Bruins head coach Bruce Cassidy announced after morning skate.

With Coyle out, Jake DeBrusk moves from the fourth line left wing into Coyle’s spot on the third unit. Trent Frederic moves back to the left of Curtis Lazar, with Karson Kuhlman drawing into the lineup on the fourth line right wing.

The Bruins’ pairings will likely have one or zero tweaks, based on Kevan Miller’s status. Matt Grzelcyk and Brandon Carlo will be together, as will Charlie McAvoy and Jeremy Lauzon. Miller did not take part in morning skate, per usual, but he likely will be with Mike Reilly. If Miller doesn’t play, Reilly likely will be with Connor Clifton.

Jeremy Swayman will be in net for the Bruins. He’ll likely be opposed by Igor Shesterkin.

The Rangers’ lineup already is dealing with a ton of injuries, so it’s a pretty ragtag bunch. It doesn’t help that Pavel Buchnevich now is done for the season and Julien Gauthier will miss the next two games. The Rangers, as a result, called up Jonny Brodzinski, Tim Gettinger and Justin Richards, though it’s unclear where they all will fit in.

Puck drop is set for 7 p.m. ET on NESN, with pregame beginning at 6 p.m. Here’s how you can watch everything on NESN today.

Here are the projected lineups for Tuesday’s Bruins-Devils game: 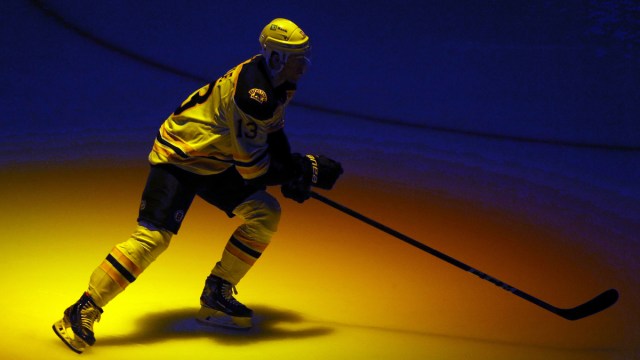