The Washington Capitals have their backs against the wall.

The Bruins took Game 4 of the teams’ first-round Stanley Cup playoffs series by a score of 4-1 on Friday night at TD Garden. Brad Marchand, David Pastrnak, Charlie Coyle and Matt Grzelcyk scored for the Bruins, while Alex Ovechkin had the lone tally for the Capitals.

The Bruins took a commanding 3-1 series lead with the win.

STRONG FIRST
The opening 20 minutes featured some of the strongest skating the Bruins have done all series which resulted in generating a ton of chances and a slew of big hits.

Despite needing to kill two penalties in the first six minutes of the period, the Bruins did not allow the Capitals to light the lamp in the early goings.

Boston went on the power play with 36.7 seconds to go in the first. Coyle rang the post on a prime opportunity before the period came to a close with the sides scoreless.

The Bruins outshot the Caps 11-4 in the first.

B’S UP BY ONE
Taylor Hall had probably what was Boston’s best scoring chance of the night on a breakaway, but Samsonov stonewalled him.

Things started to get a bit chippy about eight minutes into the second when Dmitry Orlov launched himself high into Kevan Miller before being tackled by Craig Smith. Miller went down the tunnel and Orlov originally was assessed a major penalty. After a lengthy review it was downgraded to a double-minor for roughing.

The power play needed to get going, and that they did thanks to the lethal top line.

Pastrnak sent a slap shot from the circle toward Samsonov that Marchand was able to tip in for the 1-0 lead.

Boston continued to play with incredible tempo and continued to pepper Samsonov with shots while Rask remained strong at the other end of the ice. The Capitals garnered two more power plays — which included a key block from a stickless Connor Clifton — but came up empty.

Charlie McAvoy and Anthony Mantha got into it a bit behind the Boston net which resulted in a power play for the Bruins when Mantha went off for interference with 37 seconds left in the second.

The B’s were in good shape heading into the third with a 1-0 lead while also leading in shots, 23-13.

BRUINS TAKE 3-1 LEAD
It only was a matter of time before Pastrnak found the back of the net, and he did so on the power play just 29 seconds into the third with an absolute snipe to make it a 2-0 game.

Coyle got in on the fun just 33 seconds later when he refused to quit on the play, saw the puck on a bounce and made it 3-0 in favor of the B’s.

Tempers flared afterward and the Caps found themselves on yet another power play the Bruins would kill. Marchand went off for interference shortly after that, and Washington finally got one back.

Ovechkin broke his stick on the one-timer and the puck deflected off Brandon Carlo’s skate and into the net to make it 3-1.

The Boston power play was cooking all night and continued that trend with the third goal of the night on the man advantage. This time it was Grzelcyk with a blast from the point to give the B’s a 4-1 with 5:10 left on the clock.

That would do it for Game 4, as the Bruins coasted the rest of the way.

UP NEXT
Game 5 is set for Sunday night at Capital One Arena. The puck will drop at 7 p.m. ET as the Bruins look to eliminate Washington. NESN will have complete coverage of the contest. 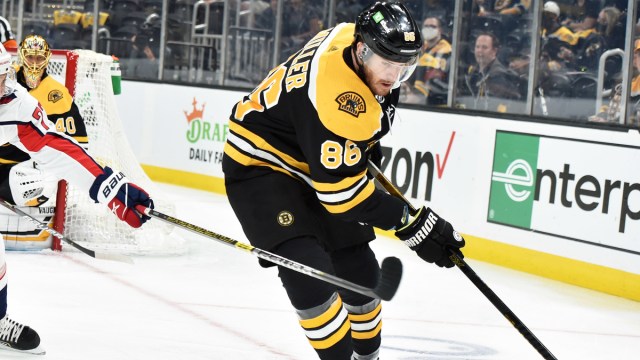