We have ourselves a series, folks.

The Bruins beat the Washington Capitals 4-3 in overtime Monday night in Game 2 at Capital One Arena to tie the first round 1-1 despite Boston taking a slew of penalties and making turnover after turnover.

Brad Marchand played hero just 39 seconds into overtime to send the series back to Boston tied.

Jake DeBrusk, Patrice Bergeron, Taylor Hall and Marchand scored for the Bruins, while T.J. Oshie and Garnet Hathaway had the Capitals’ tallies.

The Bruins tied the series with the win.

TIED AFTER 20
The Bruins started the period with some serious fire under them, and Tuukka Rask made sure to keep it lit.

Rask made some incredible saves in the opening minutes of the first, including one on Nic Dowd after a pass from Hathaway.

But then three goals were scored in the span of 4:16.

First, Charlie Coyle carried the puck behind the net and Craig Anderson took the bait. Coyle slid the puck over to DeBrusk who had a wide open net and made it a 1-0 game.

The Capitals’ power play continued to be utterly dominant and tied things up when Oshie put the Alex Ovechkin rebound by Rask.

But Bergeron only let the tie last just over two minutes.

Bruce Cassidy wanted to see more production from his top-six guys, and David Pastrnak heard him loud and clear when he fed the puck to Bergeron — after using his glove to bring down a Washington clearing attempt — in the high slot who sent a bullet by Anderson for the 2-1 edge.

The Capitals, though, certainly weren’t going down without a fight.

Dmitry Orlov sent one through traffic that bounced off a couple bodies before going by Rask by way of Hathaway.

Things got a bit chippy with 10 seconds left in the period when Mike Reilly and Conor Sheary said hello to one another behind Rask to draw matching roughing penalties.

The Bruins and Caps ended the productive first period tied 2-2 with the shots being even at 18.

SAME SCORE
The second couldn’t have started differently for the Bruins as they gave up some sloppy turnovers and odd-man rushes in the first five minutes.

The Bruins looked destined to go up 3-2 in the final three minutes of the middle period when Bergeron deflected a Matt Grzelcyk shot from the point, but Anderson stood tall and kept the game tied.

Boston did get to the puck to the net more, but things were all square after two periods with the B’s holding a 33-27 edge in shots.

TO OVERTIME WE GO (AGAIN)
Rask made some timely stops on the penalty kill against an incredibly tough Caps power play that kept the game tied. But sloppy play throughout the period led to the Capitals taking their first lead of the game.

Orlov passed the puck to Hathaway for his second of the game on a mistake Kevan Miller mistake on the pinch.

The Bruins weren’t going to let the Caps win that easy, though.

Boston’s second line put up a nonstop shift that resulted in Charlie McAvoy, Smith, David Krejci and Hall crashing the net. Eventually the puck went in and tied things up with 2:49 to go.

MARCHAND TIES SERIES
Marchand tied the series just 39 seconds into the overtime period with one heck of a one-timer. 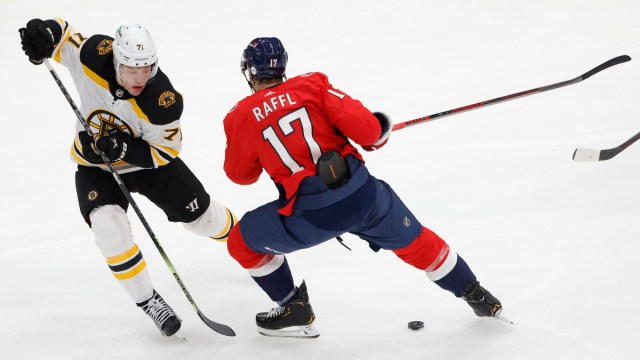 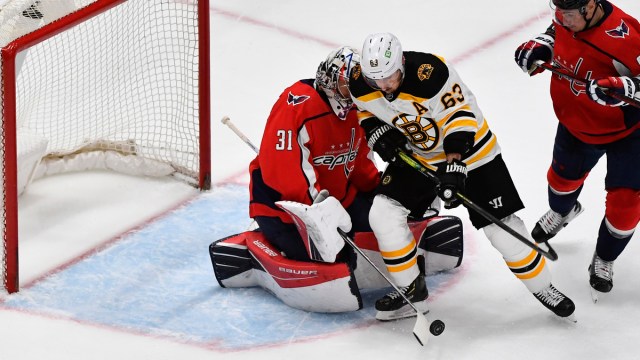