The Boston Celtics’ 2020-21 season will survive past Memorial Day.

After an ugly showing in Game 2 of its first-round NBA playoffs series with the Nets, the Celtics responded with a 125-119 triumph Friday night at TD Garden.

Jayson Tatum, who was forced to exit Tuesday’s game due to an eye injury, was sensational in Game 3. A game-high 50 points marked a new career playoff high for the 23-year-old.

With the win, the Celtics trimmed the Nets’ series lead to 2-1.

WEATHERING THE STORM
This one looked like it was going to get ugly quick. The Nets knocked down four 3-pointers over the first 3:24 of the game as they jumped out to a 19-4 lead.

But the Celtics hung tough, chipped away and took a one-point lead into the second quarter.

Tatum went into attack mode as the Celtics staged their early rally. The fourth-year pro went on a personal 6-0 run after Brooklyn amassed a 15-point lead and finished the frame with 13 points. Smart wasn’t far behind with 11, including a pull-up, go-ahead 3-pointer with 12 ticks to go in the first.

Harden matched Tatum with 13 first-quarter points of his own.

MAINTAINING ADVANTAGE
The Celtics didn’t rest on their laurels after strongly finishing out the opening frame.

Boston held its lead — which grew as large as 10 in the second — throughout the quarter and entered the break with a 61-57 edge. Tatum once again stood out with eight points, but it wasn’t the two-time All-Star alone who shined for the C’s in the second. Thompson logged Boston’s first four points of the quarter and finished the frame with eight, while Fournier racked up seven.

WIDENING GAP
After a Tatum fadeaway with just over four minutes into the third pushed the Celtics’ lead to eight, the Nets responded with a 9-0 and took their first lead since the first quarter on an Irving floater. But the Celtics didn’t crack, as Smart immediately responded with a 3-pointer to put Boston back on top.

Smart then started to heat up, knocking down two more from beyond the arc over the next minute-plus. He managed to sink one of those treys despite being fouled by Irving.

Smart’s outburst only was outdone by Tatum, who erupted for 19 points in the third. The two-time All-Star stood at 40 points heading into the final frame.

FINISHING THE JOB
The C’s came out firing in the fourth with a 6-0 run, four of which came from Thompson. But Brooklyn didn’t let Boston start to coast, as seven points from Harden and a 3-point bomb from Irving forced Brad Stevens to call a timeout with 7:35 to play.

But just as they did throughout the game, the C’s stayed composed as adversity started to rear its head. A quick six from Tatum, a 3-pointer from Fournier and a Walker pull-up stretched Boston’s lead back to double digits.

The Nets made things a little interesting when a KD 3-pointer with 21.5 seconds to go trimmed the Celtics’ lead to four, but Boston ultimately hung on for the victory.

PLAY OF THE GAME
A steal, a silky-smooth dish and a slam.

UP NEXT
The Celtics and the Nets resume their series Sunday night, when TD Garden will be at near-full capacity. Tip-off for Game 4 is slated for 7 p.m. ET. 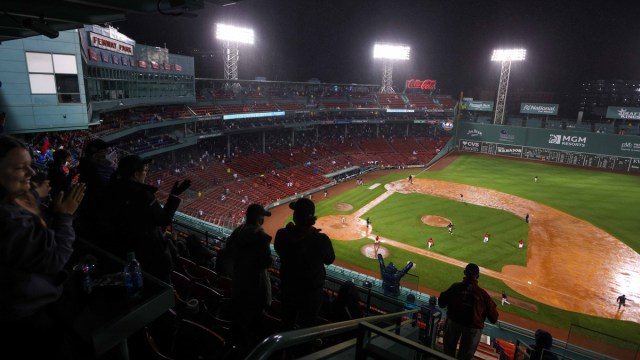