Detroit and Boston, after all, combined for 30 hits and six errors. There were three wild pitches, two hit batters and even a Boston balk, which came at what was then a crucial moment in the eighth inning.

But, at the end of the day, the Red Sox scored four runs in the eighth and earned a series-clinching win with a 12-9 verdict. And for Cora, the victory, which earned Boston a 19-13 overall record, was the most important thing.

“It was amazing, right?” the Red Sox skipper said sarcastically during a postgame video conference. “That wasn’t pretty, but we’ll take it. We won two out of three and now we move on.”

Though happy with the end result, Cora did express how the Red Sox must get better at cleaning things up, especially defensively. Boston now has eight errors in its last four games. They had six in the three games prior before making two more (both by third baseman Rafael Devers) on Thursday.

“We have to address a lot of stuff. We know that. We’ve been saying that over the course of the first month,” Cora said. “For us to get to where we want to go, we have to be a lot better. Today was a reminder that yeah, we have a good team, we know where we’re at and how many wins we got, but at the same time, we must keep working. Because the same way we were hot in April, it can go the other way around if we don’t keep working and don’t get better.”

Again, though, it’s much easier to have that conversation on a plane ride to Baltimore after a win rather than after dropping the series to the lowly Tigers. And it seems like Cora wants that to sink in, too.

“For all the ugly stuff that happened today, at the end, we got a big league win. And those are hard to come by,” Cora said.

— It hasn’t been the best of starts for Franchy Cordero, but it certainly was an optimistic sign to see the outfielder put together a strong two-way performance.

Cordero slapped three hits with three runs and one RBI. He put the ball in play during Boston’s four-run eighth to keep the rally alive and later scored on a two-run hit by Alex Verdugo, which gave the Red Sox some breathing room.

“It was good to see him smile, contribute,” Cora said. “He made a nice play in left field, too. … He got the hits and he made contact when it mattered at the end. He hustles all the time, which is great. He put pressure on their defense, and we were able to score.”

— Christian Vazquez pinch-hit for first baseman Bobby Dalbec in the eighth inning, and it clearly was the right button pushed by Cora.

Vazquez, battling a full count with runners on first and second, recorded an RBI single to shallow center. It tied the game 9-9 for the Red Sox as Devers (reached on error) came in to score.

“We know what Christian can do,” Cora said. “Kevin (Plawecki) put a good at-bat to get on (walk) and Christian, that was a great at-bat. He was patient. He had the big knock there.”

— The Red Sox ruled out the versatile Kiké Hernández with hamstring tightness prior to first pitch, and while Cora provided a vague update after the win, he admitted he didn’t know how serious the injury was.

— Even still, it doesn’t seem like the Red Sox will make any roster moves before their four-game set with the Baltimore Orioles, which starts Friday at 7:05 p.m. ET. 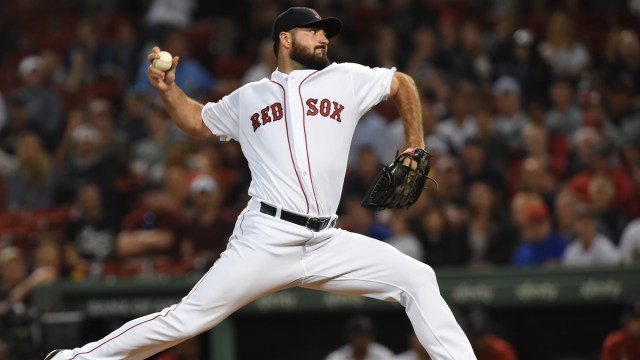